What are Black Holes?

What are Black Holes?

How do Black Holes form?

the remains of dead stars collide and get squished together, forming a strong ball of energy.the energy is so strong it pushes each other around forming kind of like a whirl pool in space... with no water. anyways it sucks any thing near it into the Black Holes. the more dead stars the bigger it gets.

What Do They Suck in?

Black Holes suck in near by stars, planets, rocket ships, and even astronauts.

when these get sucked in the first get screeched... far like a string of spaghetti they call this pull "spaghettification".or sometimes the noodle effect! weird names huh!

Why Are They Black?

when remains off stars hit the black holes admesoshere or even get near it they get pulled in ZIP gone if your in the International space station you might see a light shoot into a black circle. but then where is it... its gone! why yes its gone forever but the lights not! the lights get trapped into the black holes and no light reflects off the super duper strong admesosphere! i predict if you split a black hole in half (not possible) a light would explode you with heat imagine all that light trapped no where to go no where to shine.but when you release it it would probably blind you... or worse!

how big can they get?

how small can they get?

the smallest black hole recorded so far is as small as a small comet... so small!

some people don't believe in them others do... i'm one of the believers because their are so much facts? would their be if it was a lie? thats up to you to decide true or false? 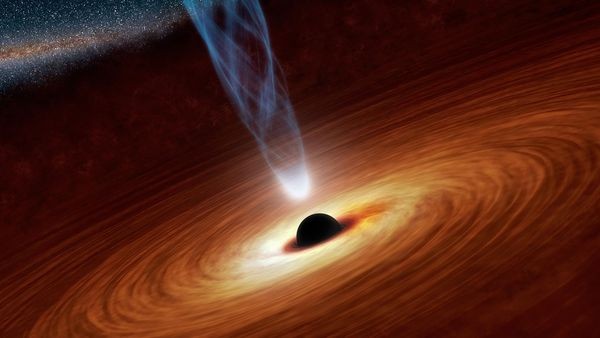 A Black Hole is Not a hole ( Micheal Carroll )