Edwin is using Smore newsletters to spread the word online.

Get email updates from Edwin:

A Dracula in the making

A Dracula in the making

This is the Aedes Albopictus, also known as the Asian Tiger Mosquito. It has black and white body marks/patterns, it primarily grows from 2mm to 10mm. They have banded legs, a white strip in its body center and head. They have 7 legs in total (including the two banded ones).

The jack of all trades!

The Asian Tiger Mosquito is an aquatic organism at birth but later develops the ability to transverse between water and terrestrial environments. In essence it is a versatile pest.

Friend or foe? You decide 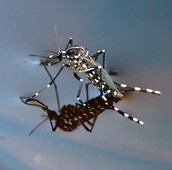 Keep your doors locked and your veins closed; Tiger Mosquito is in town.

Does the mosquito carry any diseases?

- Yes, on its Asian home turf, the mosquito is a well-known carrier of dengue fever, with West Nile fever, yellow fever, and encephalitis among the other debilitating illnesses for which it has been pegged as a transmitter (http://www.webmd.com/skin-problems-and-treatments/news/20130809/asian-tiger-mosquito-could-spread-us-disease)

Where did it come from? How did they come into the U.S?

-The Asian Tiger mosquito is originally indigenous to parts of Asia, though they were accidentally introduced to the Americas via cross continental imports.

Why is it a threat?

- The mosquito is a great carrier of various diseases such as dengue fever, with West Nile fever, yellow fever, and encephalitis. Their numbers are growing exponentially despite there being a drought and the various attempts to lessen their numbers.

- Depends where you live; the Asian Tiger Mosquito is primarily on the east coast! 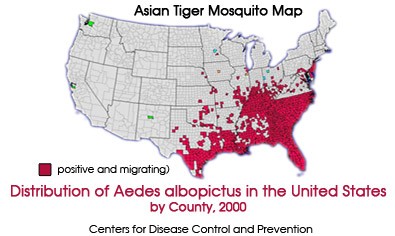 How do they spread?

The Asian Tiger Mosquito Spreads much like normal Mosquito do, they lay their eggs in still water and the larvae hatch and live in an aquatic environment before entering maturity.

How can they be stopped?

They are a tough pest and many attempts have proved futile; our best bet to wipe out this sinister pest is by introducing a modified cannibalistic mosquito into its environment (Toxorhynchites mosquitoes) or Bacillus thuringiensis israelensis, a bacteria that the Tiger Mosquito is susceptible to.

Edwin is using Smore newsletters to spread the word online.