Sandra is using Smore newsletters to spread the word online.

Get email updates from Sandra:

Congratulations to Cross Country for Advancing to Regionals

Our Cross Country team competed in the district meet at Connally and both the Varsity Boys and Girls placed second, allowing them to advance. Congratulations on a job well done!

October is FINANCIAL LITERACY MONTH and our GEAR UP students are in a Banking101 Workshop with American Bank in their AVID 2 classes today!

Let’s CONGRATULATE these students for their academic success and investment in their collegiate future!!! This was a practice test for the actual SAT & ACT tests that area part of the admissions process. #GEARUPworks #co2024 #AcademicExcellence #PreparationMeetsOpportunity

Finally, our Gear Up students toured Prarie View A & M. Such a busy week with college readiness all the way around!! Thank you for this partnership with our Cohort 2023 Students. 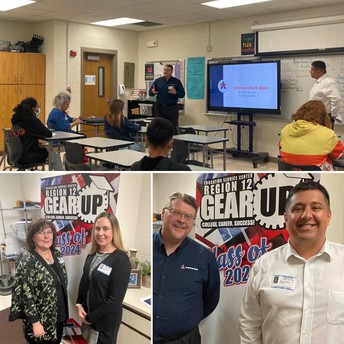 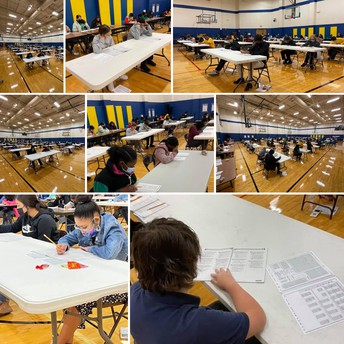 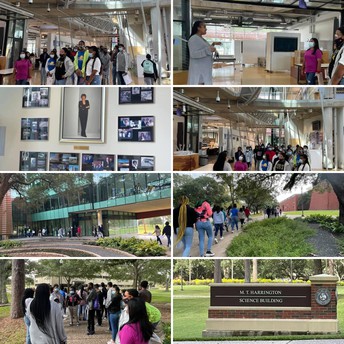 We completed a guest speaker series for Hispanic Heritage Month. Students were able to sign up to meet in Ms. Cubbage's Room during lunch to hear guest speakers.

Thank you to this week's speaker--Daniel Tagle for coming and sharing his story with LVHS today for our guest speaker series for Hispanic Heritage Month. We enjoyed listening to you today! 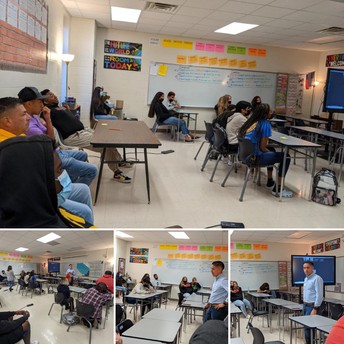 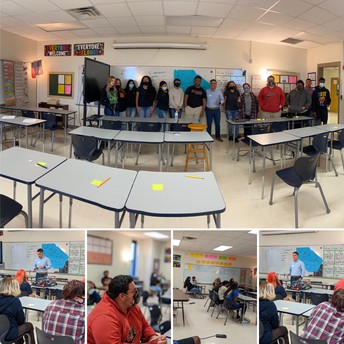 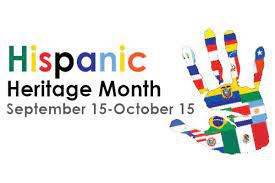 Congrtulations to our Pirate Band

Congratulations to our Pirate Band! Our band received a rating of a "1" at contest on Saturday. We will be advancing to area in Pflugerville on October 30. Good Luck to our Band!! 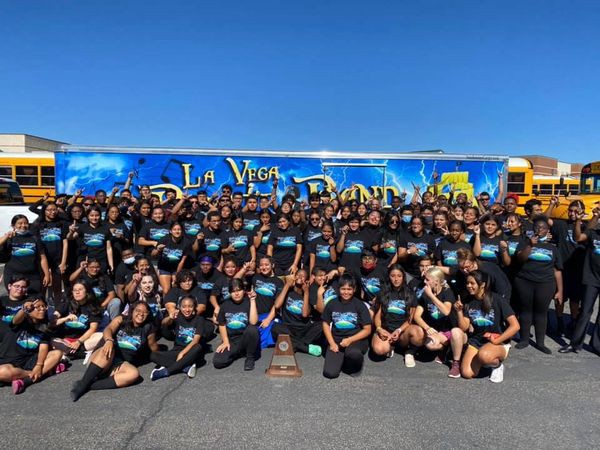 Congratulations to our Football Victory over Brownwood

From our Waco Tribune Herald:

BROWNWOOD — It’s been building, for sure. But the kettle didn’t just overflow for Bryson Roland Friday night, it practically exploded.

The La Vega freshman running back amassed four touchdown runs in the second half, adding to an already enormous night that help the Pirates down the Lions, 49-33, at Gordon Wood Stadium in Brownwood.

Roland totaled 243 rushing yards from scrimmage, easily the most for any La Vega back this season. It was at a point when his team needed it the most, looking for their first district win after a 35-7 loss to second-ranked Steohenville and what has already been a wild 2021 season for La Vega (4-3 overall, 1-1 District 5-4A Div. I).

Trailing 17-14 in the second half, Roland capped off a four-play drive with a 38-yard touchdown run to put the Pirates up 21-17. But don’t get too excited yet, as the freshman phenom wasn’t even close to being finished.

On La Vega’s next drive, Roland busted a 52-yarder for a score. Seriously, though, it gets better.

On the Pirates’ following drive, Roland tallied a 65-yard scoring jaunt — not even his longest of the night.

You want an encore? Sure. How about a 66-yarder to cap off a monster night in a huge road win for the Pirates. It was everything La Vega needed and more, and expect to see more of Roland as the Pirates continue district play.

Fellow back D’Eddrick Brawley found himself quietly having a grand night, grabbing two scores and 111 more yards on the ground.

If the running game wasn’t enough, quarterback Robert Prescott diced up a tired secondary, throwing for 208 yards and a score, a nice 44-yard pitch and catch to wideout Stephon Nickerson in the second quarter to give the Pirates the lead. Nickerson caught four balls for 90 yards.

The fantastic running game wasn’t a one-sided affair, though, as Brownwood quarterback Chance Jones combined with back Konkani Anderson for 272 yards and three scores, most coming in the second half against a tired Pirate defense.

Jones also threw for 130 yards and a touchdown, a nifty diving catch by wide receiver Jason Jackson Jr. for a score in the fourth quarter.

Sophomore Junior Martinez drilled two 31-yard field goals to round out the scoring for the Lions, who dropped to 2-5 overall and 0-2 in district play.

La Vega gets another stiff challenge next week when it returns home to face state-ranked Midlothian Heritage.

Please read the message below from Mrs. Grigsby and fill in the survey at the conclusion so that we can get as much input.

I would like to propose an idea. I have been collecting books that are being donated to "La Vega Reads". I would like to promote the giving of books with an opportunity to read them. Since 4th period is a much longer period, I was wondering if we can allow all teachers the opportunity to carve 10-15 minutes every Wednesday for students to read. ("Whatcha Reading Wednesday") The purpose is to provide time where students can enjoy reading. Students who read for fun are often stronger in the classroom in all subjects since they are building skills that most subjects rely on - skills like inferring, evaluating and retelling.

It might be good to promote it as a break from school..... SHOW time. "Silent Hiatus On Wednesdays". 10-15 minutes to set down your phone. Pick up a book, or a sketch pad or a sudoku and take a few minutes to de-stress, relax, unplug. Everyone can participate since the worst case scenario is they lay their head down for a few minutes. The important part is giving them a chance to unplug and reboot. (That is how we fix everything else! Unplug it and then plug it back in)

We can add an incentive piece - earn Pirate Points by telling a teacher or administrator about a book you read for fun, display your artwork on the wires in the 300 hall or complete a level 2 or 3 sudoku in one SHOW time.

We can draw names at the end of each month for prizes (chips? snacks?). If we just call it Pirate Points, we can also give them out for rewarding kids for random acts of doing good. (no referrals, improved attendance, helping someone, whatever...

I'd like to roll my cart of "La Vega Reads" books to the entrance of the cafeteria on the first Tuesday of the month during each lunch period. I don't want to commit to more than once a month because it eats into my MCL time. I am hoping that if my book supply dwindles, it will encourage more supporters to donate. It is also an opportunity to promote the books available in the library. I am also open to students running the cart.

Since I will be in Houston the first Tuesday in November, I am hoping to have the first book give-a-way on Tuesday, October 26. We could start the "Whatcha Reading Wednesday" or "SHOW time" 10/27 or 11/3. (or whenever we are ready to start it) 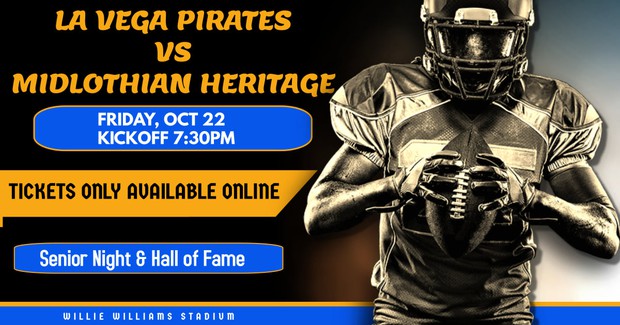 Chief Victorian from Waco PD will visit with our students in the library on November 16 from 11:15-12:00. Limited seats are available. We will have a Zoom Link to share for all to be able to participate. Please see Mrs. Grigsby for more details and to sign up. 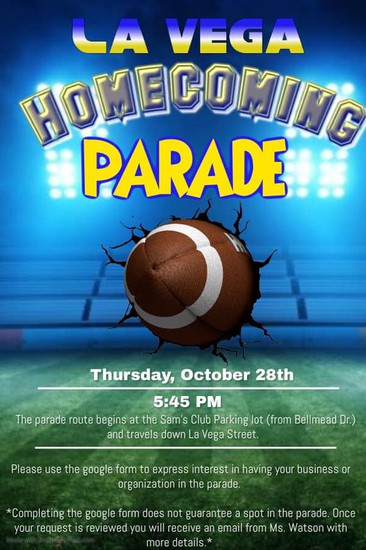 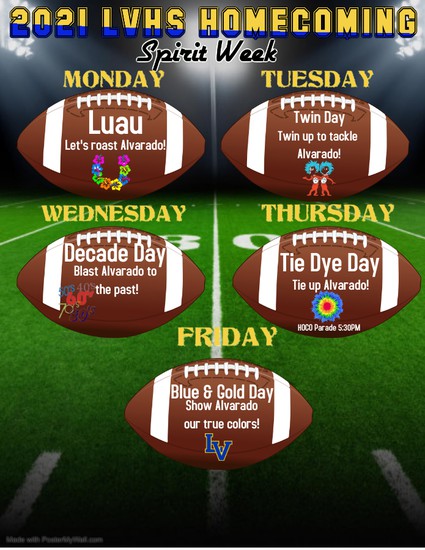 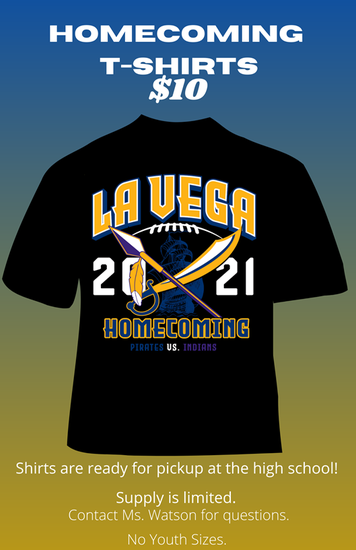 The resource below is available to your student or your family if you have issues. Please use this resource or share with anyone who may benefit from the resource. 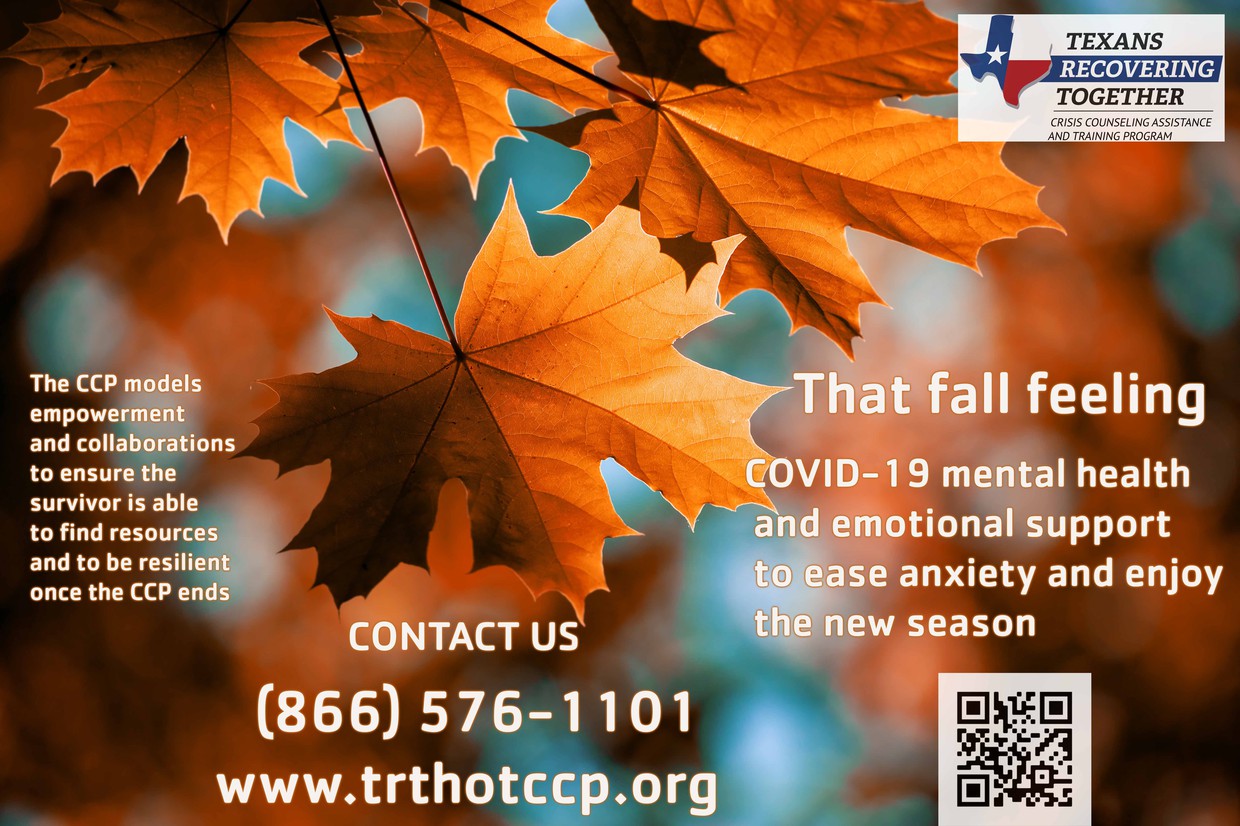 We had 25 students this Saturday!!! Keep inviting students to attend Saturday Tutorials.

ICU is offered Monday-Thursday from 4:15-5:15 in the library. Saturday School is each week from 9am-12pm excluding Holiday weekends.

Vaccine Clinics Every Monday...Spread the word!!! Please remind students that they will receive a $25 Gift Card for vaccinating!! 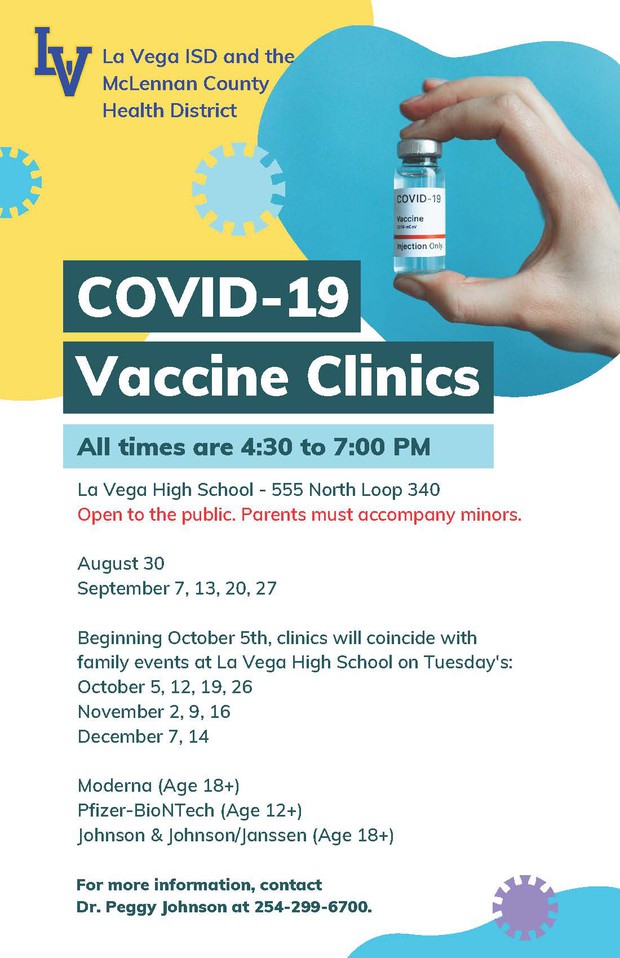 Vision : To become a flagship high school in Central Texas.

Mission: The mission of LVHS is to become a flagship high school in this area by providing educational excellence for all students in an academically challenging, positive, and safe atmosphere.

Please use the google sheet below to record all of our successes for this upcoming year. 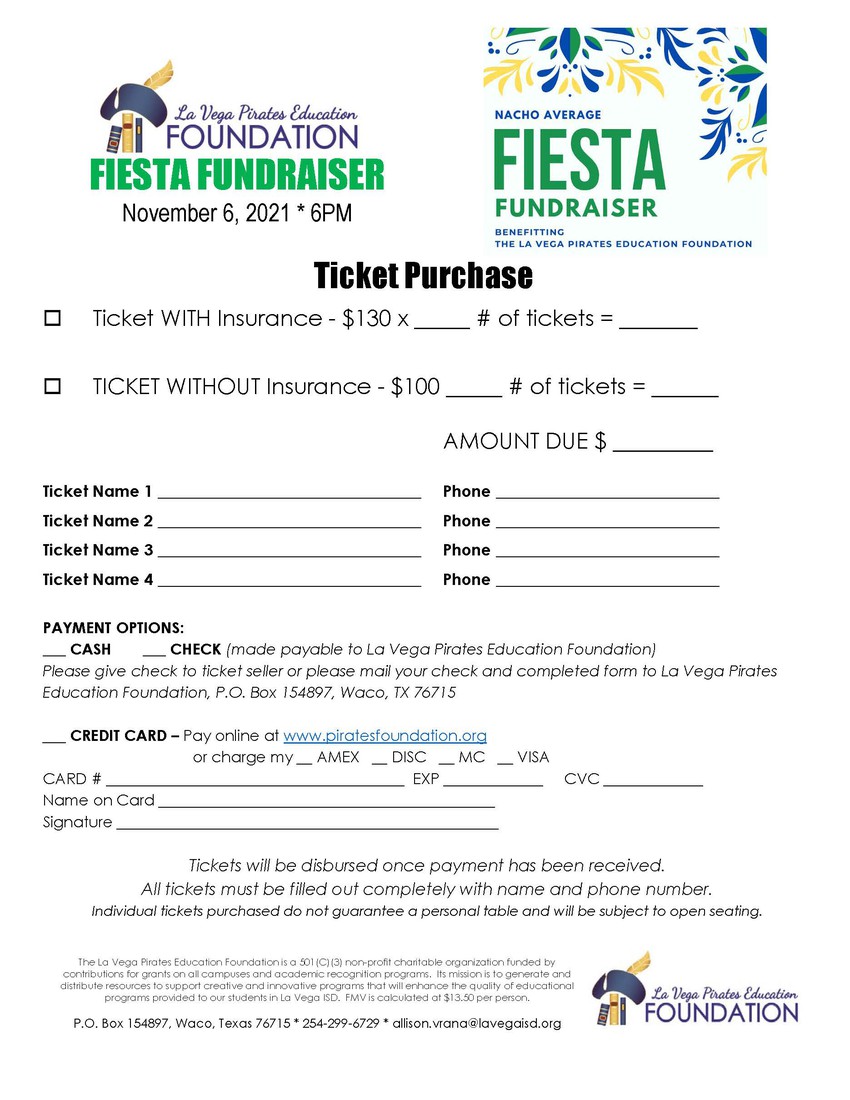 To our Biology team for having a 70 average as a campus on our latest CSA...first time in 4 years!! Woohoo...on our way to flagship in all areas!!!

To our MCL's for working above and beyond to move us to becoming an academic flagship.

It's that time of the year again for our annual Chili Cook-Off. Please organize by departments/teams. The sign up is in the attached file as well as below. This will take place directly after school on October 22. Prizes will be given to the best booth, them/costume and chili.

Make our 5th Annual Chili Cook Off the best one yet! 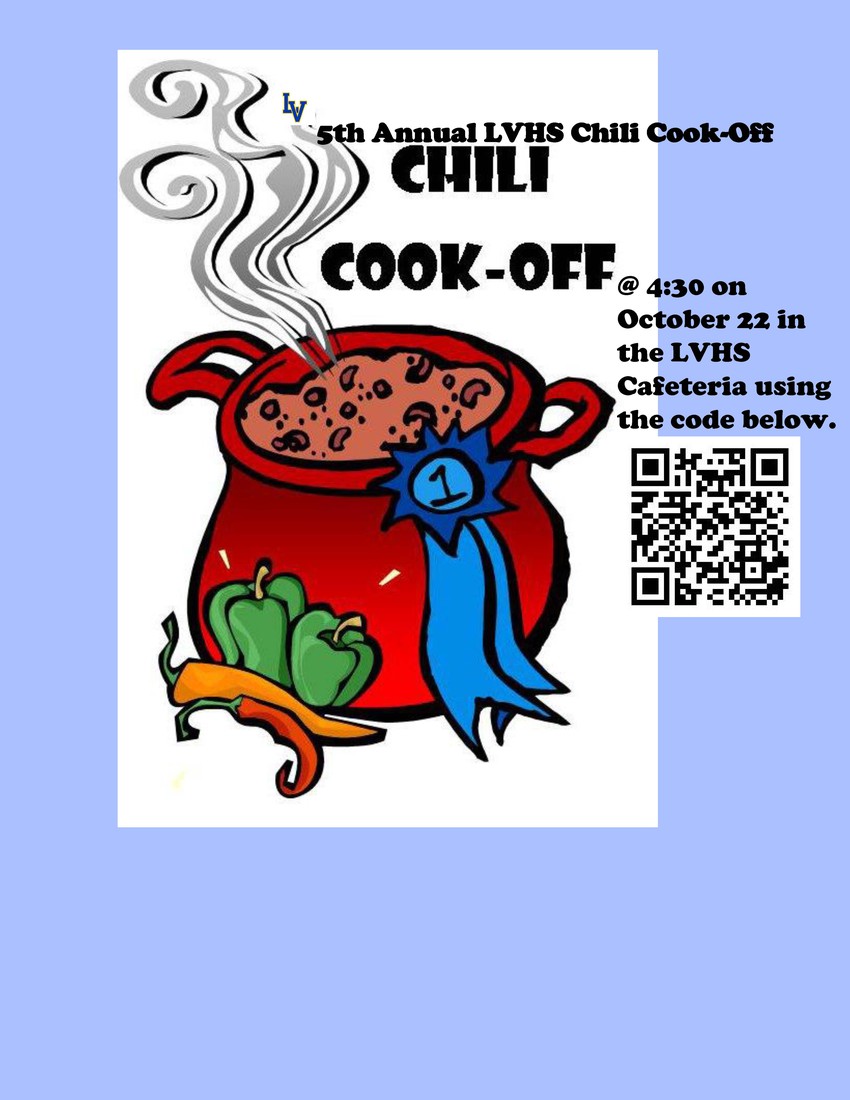 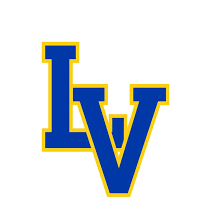 Sandra is using Smore newsletters to spread the word online.

Follow Sandra Gibson
Contact Sandra Gibson
Embed code is for website/blog and not email. To embed your newsletter in a Mass Notification System, click HERE to see how or reach out to support@smore.com
close