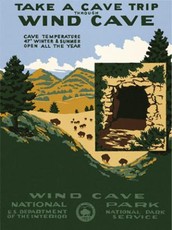 Facebook @windcave
Wind Cave NP, South Dakota contactus@nps.gov 659-302-1462 nps.gov/index.htm
Wind Cave has many marvelous features such as; boxwork formations, popcorn formations, and Madison Limestone Formation. Wind Cave also has an awesome history that you can learn all about!

A boxwork formation inside Wind Cave 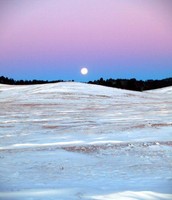 The moon setting in the winter at Wind Cave

Wind Cave has a long and extraordinary history. Wind Cave was discovered in 1881 by Tom and Jesse Bingham. They heard a loud whistling noise, which led them to a small hole in the ground, the cave's only natural opening. During 1881, people figured out by looking at artifacts that hundreds, and hundreds of years ago a group called the “Lakota Tribe” camped at Wind Cave. About 22 years later, the cave was declared sacred by the Lakota Native American tribe. In 1903, Wind Cave was declared a national park, and hopefully protected for generations to come!

Did you know that some of the features in Wind Cave date back to over 1,000 years? Well, it's true and some of these things are ancient artifacts like fossils, and tipi rings from the Lakota Native American tribe. Wind Cave was formed in the Madison Limestone formation, which was deposited in a warm shallow sea about 350 million years ago. The atmosphere in the cave feels somewhat warm. Since caves are often thought of as dark places, some people might think that it would be dark inside Wind Cave. The truth is that inside of Wind Cave it’s actually pretty bright.

Wind Cave is a national park located in South Dakota. Wind Cave gets its name due to wind blowing through the natural opening. Wind Cave has special features that make it unique including; boxwork formations, popcorn formations, and undiscovered caves! Popcorn formations, such as those shown here, are formed by water seeping out of the limestone wall and precipitating calcite. A boxwork formation is comprised of thin blades of calcite that project from cave walls and ceilings, forming a honeycomb pattern.

Why The Leaves Fall

Many moons ago when the world was still very young, the plant and animal life was enjoying the beautiful summer weather. But as the days went by, autumn set in, and the weather became colder with each passing day.

The grass and flower folk were in sad condition, for they had no protection from the sharp cold. Just when it seemed that there was no hope for living, he who looks after the things of his creation came to their aid. He said that the leaves of the trees should fall to the ground, spreading a soft, warm blanket over the tender roots of the grass and flowers. To repay the trees for the loss of their leaves, he allowed them one last bright array of beauty.

That is why, each year during Indian summer the trees take on their pretty farewell colors of red, gold, and brown. After this final display, they turn to their appointed task-covering the earth with a thick rug of warmth against the chill of winter.