Density independent factors can affect a population no matter what it’s density is. For example: natural disasters, temperature, sunlight, human activities, physical characteristics and behaviours of organisms affect any and all populations regardless of their densities. Natural disasters such as droughts, floods, hurricanes and fires can be devastating to aquatic life. For example, a severe drought could lower the water levels of Lake Winnipeg and decrease its carrying capacity. Thus, the fish population would decrease. Temperature influences the activity and growth of organisms. Temperature also determines which type of organisms can live in a lake. Usually, the higher the water temperature, the greater the activity in a lake. However, all aquatic species have a preferred temperature range. If temperatures vary too much out of this range the species will either die or move to a different location. Temperature also influences the chemical properties of water. The rate of chemical reactions in the water increases as temperature increases. For example, warm water holds less oxygen than cool water, so even though there is more activity in warm water there may not be enough oxygen for the activity to continue for long periods of time. Sunlight can only penetrate to a depth of 30 meters in water. Thus most photosynthesis in aquatic environments occurs near the surface. This means that most plants cannot grow if they are at the bottom of a deep lake. Human activities can also affect population dynamics. For instance, lake sturgeon spawn in fast water and sometimes use the “tailraces” of hydroelectric dams. However, the water level in this location often drops suddenly and the eggs die because they become exposed. Physical characteristics of organisms can affect their population. Many organisms have adapted and evolved in order to increase their chance of survival. For example, some species of fish have colored markings to warn predators that they may be toxic. Or, some species use camouflage colors to help them hide and avoid being eaten. Behaviors of organisms can also affect their population. For example, some species migrate to find new food sources or to mate. Some organisms create societies or feeding territories. For instance, white bass live in schools and work together to drive emerald shiners to the surface for feeding. Some species may have mating or courtship behaviors that affect their population.

Density dependent factors can only affect a population when it reaches a certain density. For example, competition, predation, disease, parasitism, crowding, and stress are all factors that only affect populations with high densities. Competition can occur between many organisms that live in the same habitat. Resources are limited in a habitat so organisms must compete for food, water, space, and shelter. For example, both northern pike and walleye prey on yellow perch and so they compete for the same food source. However, this competition is only apparent when the populations of northern pike and walleye have high densities OR the population of yellow perch has a low density. Predation occurs when the population density of predators is high. The predators will consume their prey and increase their own population. However, the population of the prey will decrease. On the other hand, the lack of predation (when the population density of predators is low) will cause problems for the prey’s population. When there are few predators, the prey’s population increases very quickly and this can lead to the depletion of resources and increase disease. Disease in a population increases with the density of that population. High densities makes it easier for parasites to find hosts and spread the disease. Parasitism is a relationship in which one species benefits at the expense of the other. A parasite is an organism that lives in or on another organism (called a host) to get nourishment. While the parasite benefits from this relationship the host is harmed or killed. Crowding only occurs at high densities. Over-crowding can cause depletion of resources, disease and stress. Stress usually has a negative effect on populations. Stress can make organisms weak and more prone to disease.

Located 217 m above sea level, Lake Winnipeg is a shallow lake composed of two basins: a wide north basin and a narrow south basin. On average, Lake Winnipeg is only 12 meters deep and receives 517 mm of precipitation annually. Lake Winnipeg provides a habitat for over 50 different species of fish including yellow perch, chestnut lampreys and rainbow smelt. Yellow perch prefer water that has little current. They can tolerate moderate tubidity. Also, they prefer a temperature range of 18 to 20 degrees Celsius. If the temperature of the water varies too much above this range, yellow perch will either move to a new location or die. Yellow perch spawn in May or early June when water temperatures are above 6 degrees Celsius. First, they migrate to tributaries and then several males attend a female while she releases her eggs. Yellow perch can grow to 302 mm in length. Their life span is approximately 9 years. If there is a lack of resources or too many of them (over-population), yellow perch adapt by stunting. This means that instead of starving, they simply do not grow as large as normal. Thus, they are able to live off less food. Yellow perch feed in midwater or on the bottom of Lake Winnipeg. They eat a wide variety of invertebrates, and fish such as emerald shiners. The eyes of yellow perch allow them to see almost 360 degrees around them. Thus, they are better able to spot their prey and evade predators. In Lake Winnipeg, yellow perch are eaten by northern pike and walleye. They are also caught for food by commercial fishers and anglers. Chestnut lampreys are also found in Lake Winnipeg. Lampreys are parasitic fish that attach to other species of fish (such as yellow perch) to feed on their blood and tissues. Recently, rainbow smelt have been introduced into Lake Winnipeg. Rainbow smelt are a very invasive and competitive species. They have been thought to have caused a decrease in the emerald shiner population. Lake Winnipeg provides a home for many species of fish. However, a severe drought could disrupt this ecosystem greatly. Lake Winnipeg’s water level would drop, the temperature could change and it could become more turbid. Thus, the carrying capacity of the lake would change. But, in its current condition, Lake Winnipeg is an excellent habitat for many species of fish. 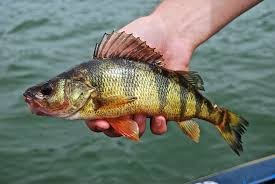 2) From the previous article “Yellow Perch in Lake Winnipeg”, identify and describe as many limiting factors as possible and classify them as density independent or density dependent.

a. Rainbow smelt and yellow perch attempt to occupy the same area. The more aggressive smelt survive; the perch do not.

b. A severe flood brings a lot of sediment and silt into Lake Winnipeg. The turbidity of the lake increases greatly.

c. A drought decreases the water level in Lake Winnipeg. The carrying capacity of the lake decreases. d. Due to the introduction of rainbow smelt, Lake Winnipeg becomes crowded and some fish species do not survive.

f. Many fish die due to an increase in water temperature.

g. Due to over-fishing, the number of walleye in Lake Winnipeg decreases.

h. A population is growing quickly when parasites cause disease to spread quickly.

i. Since lake sturgeon migrate long distances to spawn, many do not survive the trip