In the 1800s many transportation systems were boats and they were used to travel people or goods to one place or another.

Many of the women in the 1800s were forced to work in factories because they didn't have any responsibilities and weren't married.

In the 1860s about 30,000 miles of railroad had been linked to almost every part or city of the Eastern United States.

Back then many women were put to work in industry to make cloth and textile. 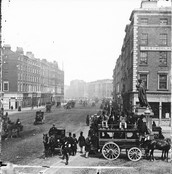 In the 19th century many women were put to work by their boss and they made them do textile mills and other things without protection and the right gear.

In the 1800s machines were being used by people that worked in factories.

In the 1800s factories were being used by people to make goods and other things.

In the 1800s the mills were being used by people to construct textiles.

In the 19th century many women were put to work with those that came from farm families. Also many women got jobs to work in factories and the Lowell System employed many young women that were unmarried. Lastly many women worked for many hours and weren't paid as much for the jobs that they were doing.

In the 19th century when factories and mills got established it changed the way people worked. Many merchants began to build large textile mills, or factories, near rivers and streams

Follow Maria Mendivil
Contact Maria Mendivil
Embed code is for website/blog and not email. To embed your newsletter in your email, click HERE to see how or reach out to support@smore.com