rowan is using Smore newsletters to spread the word online.

Get email updates from rowan: 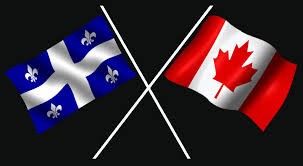 While most of Canada speaks english there is one province were not only the language differs but so does much of the culture. This province is Quebec. Everything from street signs to the language taught at school is french. With all its differences Quebec want to separate from the rest of Canada and become its own country. Just like a state separating from the U.S. everyone must agree on it. Many times it has gotten close but has yet to happen. Canada as a whole does not want to lose Quebec because it is a marjor source of income being next to the Great Lakes and the St. Lawrence River.

Ever since Canada was first founded there has been struggle between England and France for control. Between 1689-1763 fought four wars. The British defeated the French in 1759 in the Battle of Quebec. Then in 1763 France surrendered all of its empire in the land of Canada today. Even after France lost its empire nearly 70,000 French colonist remained still. In 1774 British government made laws to protect the French Canadians and allow them to keep their own language, laws, and culture. Today though many French Canadians feel discriminated by the English.

English speakers living in Quebec today are afraid that Quebec will separate and they will lose their freedom. Because of this many are moving to ensure their freedom. The people of Quebec feel so different from the rest of Canada. The French are now proud of who they are and think they can be a powerful nation. While today the French Canadians are still a minority they are willing to fight, to be independent.

Canadian Separatism: According to the Quebecois

rowan is using Smore newsletters to spread the word online.