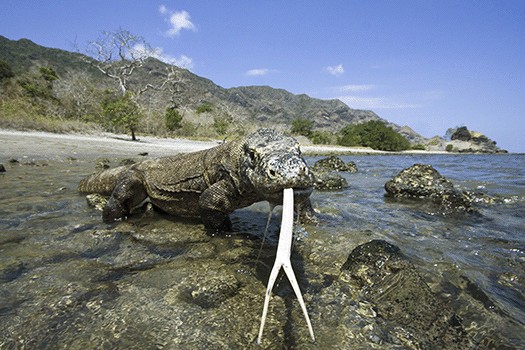 Komodo Dragons favor extreme heat such as a tropical dry forest, or a monsoon forest.

The temperature they like is ussualy 95 degrees fahrenheit and with 70% humidity.

Lastly to mantain a constant body tempeture they make burrows- this means they are endotherms. This is why they only live on the island of Komodo and some very other select places such as the Lesser Sunda Islands of Indonesia.

The Komodo Dragons are both strong and fast; they can overpower deer, pigs and even water buffaloes. They can run up to 11mph in short bursts using all four legs. Also these reptiles have very powerful hind legs to pounce on the prey. After a Komodo Dragon has swallowed a animal rather than chewing it, it will ram itself using its sudden burst of speed against a tree to get the carcass down its throat. As a child however, Komodo Dragons climb trees to escape predators and other Komodos.

A Komodo Dragon's body has scales to protect itself, muscular tails, bowed legs, flat heads, rounded snouts, strong claws, and very sharp teeth. They are vertebrates because they are reptiles. Their leathery, grayish brown skin doesn't molt but rather shed. Komodos' that live on the island of Flores have a earthen red body with a yellow head. As a child though, Komodos have patterns with combinations of colors including yellow, green, grey, and brown.

Komodo Dragons' are classified as scavengers because they have poison in their saliva that kills the prey over time, and then later it hunts the deceased animal and then eviscerates it using its sharp claws and teeth. Komodo Dragons eat up to 80% of their body weight in a single feeding. They are carnivorous meaning they will only eat meat. Even as a baby they feed on small prey and dead animals. Even though they eat an incredible amount of meat in one feeding, they only need as few as 12 meals a year due to low metabolism. Lastly, Komodo Dragons also use their forked tongue to seek food and water.

15-30 eggs in a hole- incubates for about nine months.

Baby Komodo Dragons' will feed on meat when born.

Komodo Dragons have a special adaptation for hunting; they have poisonous saliva with over 50 strains of bacteria used to kill they prey within 24 hours of the bite. (This also could be considered as internal because its glands make up this poisonous saliva). Then they hunt down the deceased prey with their keen sense of smell needed to tract down the animal and then devour it using its sharp teeth and claws. Komodo Dragons use smell to sense prey or danger approaching since they have poor hearing and eyesight. They stick out their tongues to detect any animal or danger, then process's it through their specialized organs in their mouth. Lastly one mating adaptation is the amniotic egg, which protects, discards waste, and feeds the embryo without the mother having to do that.

1 The Komodo Dragon is the largest living lizard species. (Alliteration)

2 Komodo Dragons can swallow whole prey the size of a goat.

4 Komodo Dragons can build up so much force they can knock down trees.

1. What were you supposed to do for your project? - I was supposed to research and present information about the Komodo Dragon.

2. What was your favorite part and why? - My favorite part was typing the self-assessment because I did not need to do any research on it.

3. If you could do this over, what would you do differently, and why. - I would have picked an animal that's known better such as a shark or tiger because it was difficult to find information on the Komodo Dragon.

4. What grade do you think you deserve and why? - I believe I deserve a 70/70 on this projects because I followed all the instructions and met the requirements.

5. I felt very nervous about this project because I knew there wasn't much information on it, so it would take me a while to complete it.