Sustain is using Smore newsletters to spread the word online.

Get email updates from Sustain: 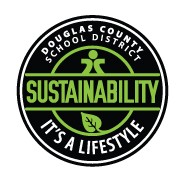 The 2014-2015 school year has been great for sustainability at DCSD!

The Office of Sustainability has a lot in the works for the 2015-2016 school year. We look forward to sharing with you when you return from a well-deserved and much-needed summer break. Congrats on a wonderful, and much more sustainable, year!
Friendly Reminder: Energy Vampires

As you prepare your classrooms for the summer, don't forget to unplug all your energy vampires! This makes a huge difference in energy and cost savings.

Congratulations to Sand Creek Elementary, Sedalia Elementary, and Pioneer Elementary for being the newest winners of the Eco-Schools USA Green Flag!

To be eligible for the prestigious Green Flag Award, a school must accomplish the criteria under each of Seven Steps and address 3 Pathways. Each of the criteria has an associated point value. The Green Flag requires a total of 300 points. It must be renewed every two years. This is a very intensive process that required some hard work. Congratulations Sand Creek, Sedalia, and Pioneer!

CO-Horts: Colorado Gardening for Everyone

CO-Horts: Colorado Gardening for Everyone is a great blog to follow to get advice and observations from our local CSU Extension Horticulture Agents and Specialists. 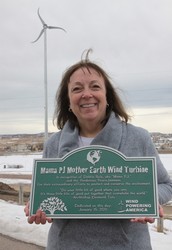 Debbie’s belief in empowering students to make a difference in the world led her to start the PeaceJam Club at Ponderosa in the fall of 2006. Ponderosa’s PeaceJam Club is part of the PeaceJam Foundation, an international educational foundation whose goal is to create young leaders through the inspiration of Nobel Peace Laureates. Over the past six years, Debbie and the PeaceJammers have created extraordinary change in their school, community, and the world. At Ponderosa, the PeaceJam Club has focused primarily on environmental service projects. With Debbie’s endless dedication to the group, the students have made remarkable strides in recycling, energy management, renewable energy, and community involvement.

What inspires you to address sustainability?

My introduction to sustainability started when I was growing up in farm country in north central Maryland. Although "being sustainable" is not what my parents called it. It was called not being "wasteful". My Dad always bundled newspapers and collected cans for the Boy Scouts and all of our food scraps went into the "scraps" pile that later ended up in the garden. We had a huge garden and my Mom canned and froze all of our vegetables to last from one season to the next. At that time we could also burn what trash we had in a fire pit so having your trash collected was unheard of. Even though my parents did not have a farm my aunts, uncles, and grandparents did; and we all lived within five miles of each other so all of our meat (beef, pork and poultry) was raised to be harvested for everyone in the family. We also had a milkman and my grandmother made butter, so I used to think it was a real treat to stop at our very small country store to buy anything!! My Dad would always yell at me to turn off lights saying, "There's no one in this room, why are the lights on?" In the heat of the summer, he would even carry water collected from the dehumidifier in the basement outside to water flowers because he didn't want to waste the well water. To me that's about as sustainable as it gets!!

As a society we have become so materialistic and wasteful (as my Dad would say). Our resources are not limitless. Our waters are polluted. Our air is polluted, climate change is real and very scary to me.

What has changed in school sustainability since you started?

In November 2009 I attended a talk by 10 Nobel Peace Prize Winners who sit on the Board of Director for PeaceJam at the University of Denver and I was hooked! I decided that PeaceJam had to come to Ponderosa. The PeaceJam Foundation is an international educational organization that gives young people the opportunity to work with and learn from Nobel Peace Prize Winners. Students quickly learn how peace is instrumental to solving a lot of issues – poverty, access to clean water, rights for women and children, and protecting the environment. The students did some research and decided that restoring the earth’s environment would be their service learning project and with that recycling came to PHS. They gathered up boxes from anywhere they could find them and placed them in each classroom and office. Before we knew it we had so much recycling and nowhere to put it. We had to get more recycling dumpsters and soon we were recycling 75% of our trash stream.

From recycling we took on the challenge of reducing the massive amount of electricity used by our school. In just five months in the spring of 2008 we reduced our electricity usage by 13.8% and won $10,000 for PHS through a district competition. All of this was accomplished by working with staff and custodians to remove more than half of the fluorescent light bulbs in our building and also posting reminders to turn off lights and computers when not being used. We are a very competitive bunch and eventually reached our maximum reduction of 41.4%!!!!

Sustainability has become a way of life at Ponderosa and continues strong today! None of this would have been possible without the support of Chuck Puga, our principal. Chuck embraced this effort with such enthusiasm and we often find him “working in the dark”! The example he sets by always turning off his lights when leaving his office (and reminding those of us who forget) and keeping his recycling bin full has been key to our successful sustainability efforts at Ponderosa.

What advice do you have for other sustainability champions?

I believe the most important element in a successful sustainability program is a group of dedicated students – those who understand how critical it is to reduce what goes into our landfills. These students can influence their peers by setting the example, making the effort to put what goes in recycling in recycling and what belongs in the trash in the trash. The PeaceJammers are often seen digging through trash for items that belong in recycling!! Second, support from administration is a must!! The example they set really helps to pull the rest of the staff into the movement.

Debra Ruiz was one of the first sustainability champions at the district. She started at Ponderosa in 1998 as a secretary in the main office. She retires this year after 14 years. She has truly lived the lifestyle of sustainability. Thank you, Debbie, for inspiring countless students to leave the world better than they found it!

Project Learning Tree is now accepting applications for PLT GreenWorks! grants. Schools and community programs can apply for grants up to $1,000.

Green Up Our Schools Grant Program

Rolling application is now available! All elementary schools in DCSD are welcome to apply for the 2015-2016 school year! 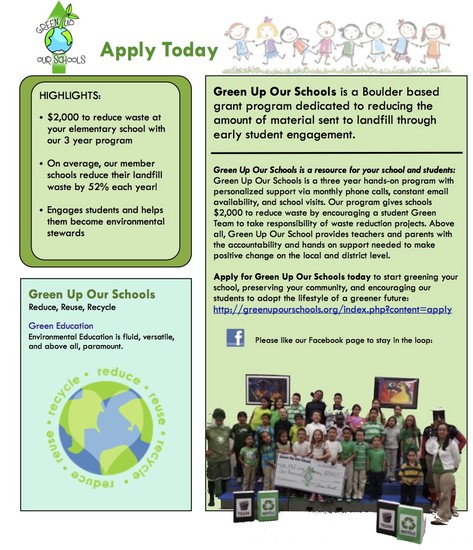 Don't forget to use the Sustain DCSD collaborative space on Google Drive called Sustainability Program. If you aren't able to access it, just email us and we will invite you to it. In it, you will find: 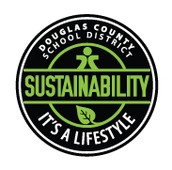 LeeAnn is our sustainable operations leader. She is available to help you with:

Courtney is a service-learning and green schools advocate. Call her for things such as:

Mike is our energy guru, helping to track data and usage for all schools. He can help you with:

Sustain is using Smore newsletters to spread the word online.