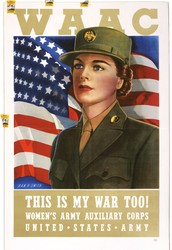 How It All Begin

In May, 1942, Congress allowed women into the military by establishing the Women's Army Auxiliary Corps (WAAC). Oveta Culp Hobby, an official with the War Department, was appointed to be the WAAC's first director.

"Women who stepped up were measured as citizens, not as women...this was a people's war, and everyone was in it." -Oveta Hobby 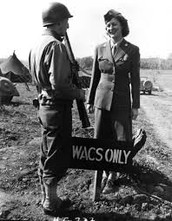 Women were pleased to be a part of the WAAC; however, women were displeased that this was just the auxiliary corps and not part of the regular army. Thus, the WAAC was then replaced with the Women's Army Corps and director Hobby was assigned to the rank of colonel.

In 1939, pilot Jackie Cochran wrote to Eleanor Roosevelt suggesting that women pilots should join the war effort. In 1942, training camps began so the next year Women's Airforce Service Pilots could begin.

About 400,000 American women played important roles in the military effort during the war. Sixteen women were given purple hearts as a result of injury due to enemy action. Over 400 women lost their lives in the military for American troops. 68,000 women served as nurses in the army and navy in addition to these new organizations.