Get email updates from Margaret:

by Izi, Jack and Maggie

by Izi, Jack and Maggie

• one-third was Pacific salmon and two-thirds was Atlantic salmon

• one-third was wild and two-thirds was farmed

• one-third was domestic production and two thirds was imported 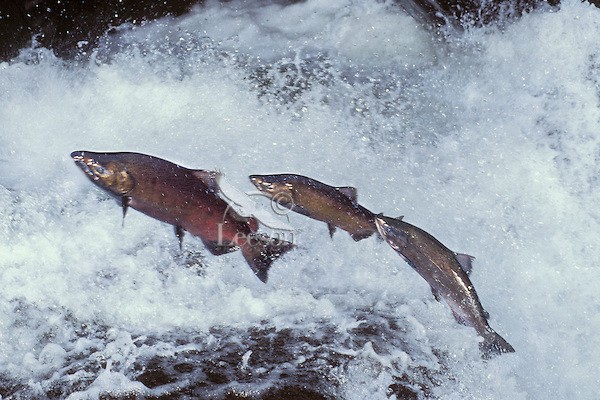 How Salmon Farming Works to Catch and Grow Salmon 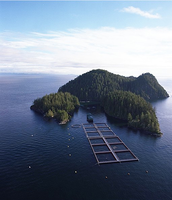 They are usually placed side by side to form a system called a seafarm or seasite, with a floating wharf and walkways along the net boundaries. Additional nets can also surround the seafarm to keep out predatory marine mammals.

Salmon farming takes place in the neritic part of ocean

The types of fish that are harvest are Atlantic Salmon (most heavily farmed), Coho Salmon

An alternative method to hatching in freshwater tanks is to use spawning channels. These are artificial streams, usually parallel to an existing stream with concrete or rip-rap sides and gravel bottoms. Water from the adjacent stream is piped into the top of the channel, sometimes via a header pond to settle out sediment. Spawning success is often much better in channels than in adjacent streams due to the control of floods which in some years can wash out the natural redds(pronounced same as the color 'red'). Conventional hatchery systems operate flow through where spring water or other water source flow into the hatchery. The eggs are then hatched in trays and the salmon smolts produced in raceways. The waste products from the growing salmon fry and the feed are usually discharged into the local river.

Salmonids are carnivorous and are currently being fed compound fish feeds containing fish meal and other feed ingredients, ranging from wheat byproducts to soybean meal and feather meal.

How does Salmon Farming Harms or benefit the ecosystem?

Salmon farming does harm the aquaculture production systems. Salmon farming uses net-cages in the ocean. Farm waste, chemicals and diseases are released into the water, which harms other marine life. Deaths of natural predators occur because they are attracted to the pens of fish. To raise salmon, kilograms of other fish need to be used to feed the salmon, which has a significant effect on the environment. A devastating impact is sea lice on wild salmon. Sea lice proliferate on the salmon farms and attack baby salmon that are going to the sea.

The FDA regulates Salmon farms. They supply funds into making the Salmon healthy and growing. The FDA also regulate the drugs that go into the Salmon through the food given to them by the farmers to make the salmon stronger, healthier and better for us.

Amendment 91 is an innovative approach to managing Chinook salmon bycatch, It combines a limit on the amount of Chinook salmon that may be caught and has incentive agreements and performance standards. The program was designed to minimize bycatch and prevent bycatch from reaching the limit, while providing the flexibility to harvest the total allowable catch.

Ways of Mitigating the Effects of your Device/farm

A way to mitigate the effects is closed contamination of technologies. This will address the serious environmental problems by separating the farmed salmon from the marine environment. These closed systems can be used both on land and floating in the ocean.

What would happen if the government banned this type of commercial harvest? Is this fishing method/farm environmentally sustainable? Why or why not?

If the government banned this type of Salmon farming then people would have to rely on fishing in the deep ocean to get their salmon or in streams. Farms are an easier way for people to harvest Salmon for human consumption. This is a harmful and not sustainable method because there is an open net in the middle of the ocean that catches fish and also releases chemicals out into the marine life harming it.