December is using Smore newsletters to spread the word online.

Get email updates from December:

WILL TYLER BE ABLE TO SURVIVE THIS YEAR?

Tyler Miller, a messy haired boy, used to be the kind of guy that was never noticed in the background. But ever since he was busted for doing graffiti on the school walls, everyone now has a new respect for him. His senior year has not gone as planned. Teachers are harder on him, he's getting into fights, and he has also caught the attention from queen bee Bethany Milbury. Will Tyler get through this year, or will there be too many obstacles for him to overcome? 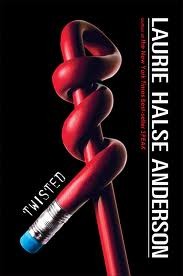 Where the majority of the fights that Tyler is in always happen.

Where Tyler has to go and and ends up having to face decisions and problems he never thought were possible.

The windey road is Tyler's quest to find out who he's really supposed to be.

Don't be the last person to get one of New York's bestsellers. Be sure to get your own copy of Twisted!

"Once again, Anderson's taut, confident writing will cause this story to linger long after the book is set down" -SLJ

Above Laurie Halse talks a little about her book Twisted

December is using Smore newsletters to spread the word online.