Imagine yourself as a forest animal scurrying through the thick brush on the dirt covered floor. Everything is peaceful then all of a sudden the ground starts to rumble, and magma and rocks spew around you, as the sky becomes dark. The volcano has erupted for the last time.

The Cause and its Effect

Negative: The volcano erupts, causing minerals, ash , and toxic gasses to spew into the air. This heats the Earth and/or cooling the temperature of the ecosystems. Eventually the ecosystems will become too hot or cold for most creatures, and they will either migrate, adapt, or die of the climate.

Positive: When the toxins are spewed into the air carbon dioxide is released which can be a good air source for plants who release oxygen. If the volcano is underwater it will create and underwater ecosystem that wasn't there before going from bad to good. If enough the magma will create an island, like Hawaii or Surtsey.

Cause in the First Place: Volcanoes erupt because or the intense density and pressure. With the lower pressure of the magma as to the rocks around it causes the melted rock mesh to rise. Kind of like bubbles in syrup. It will continue to rise to the surface determined by the weight of the surrounding rocks.

Negative Effects of a Volcano

When volcanoes erupt they can harm the atmosphere. They release toxins and ash into the air. the ash can cool or heat the earth's environment, depending on the size of the molecule. The toxins can be harmful to other creatures, killing them.

If the volcano erupts under water the it can kill marine life, and the magma could cool and trap them behind the cooled rock.

When volcanoes erupt the can harm animals and civilization of the land near it. The can spew rocks and red hot magma on life all around it.

Positive Effets of a Volcano 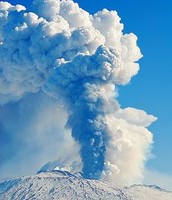 Good things for the Earth are not abundant on a volcano's to do list. Nevertheless, when it releases natural gasses that can stretch across the world and be a good source of carbon for plants, increasing photosynthesis.

Underwater the volcanic eruption (after its rain of destruction) can leave behind new ecosystems for marine life, and/ or create islands for scientists to discover.

When a volcano erupts on the surface of an island it can even connect the island to continents, naturally expanding the empire of any country.

The Effect on Habitats

Within the habitat animals will die from the volcano and natural causes, if they run and everything dies secondary succession will begin and biodiversity will eventually come back. Option number two part of the forest is destroyed, animals will leave and then come back and make up for the lost 2/3's of their species. At first the ecosystem will become unstable because of the lack of life, but soon biodiversity will come back.