The Masque of the Red Death

The Masque of the Red Death

The Masque of the Red Death is about times when the virus tuberculosis was dominating death rates. In the story it talks about how a prince locks him and 1,000 other wealthy subjects of his kingdom in his castle to try and hide from the Red Death. The royals are enjoying themselves with extravagant parties with music, but when the one mystery man walks through dressed in red everyone starts dying. 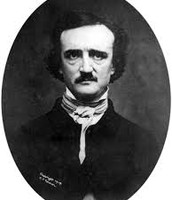 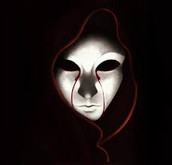 Edgar Allan Poe's life was always filled with hardships. His mom died of tuberculosis when he was only two! Since his dad had left them he lived with foster parents. He loved his mother, but his father had hated him. After his foster mother died of no other than tuberculosis his father sent him to the university of Virginia where he only had enough money to pay his tuition. After his foster father died and Edgar was left out of the will, he left to go live with his aunt. He fell in love with his 12 year old cousin Virginia and they married. After years of marriage in-which they expressed their love, but struggled to make ends meet. The for the third time in his life Edgar had a loved on who was taken by tuberculosis. Virginia had died. Edgar starting falling apart as he did odd jobs, and finally he died found drunken in the street. 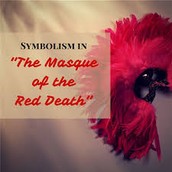 In the story one of the symbols would be the spooky clock. It was stated that, "It was in this apartment, also, that there stood against the western wall, a gigantic clock of ebony. Its pendulum swung to and fro with a dull, heavy, monotonous clang; and when the minute-hand made the circuit of the face, and the hour was to be stricken, there came from the brazen lungs of the clock a sound which was clear and loud and deep and exceedingly musical, but of so peculiar a note and emphasis that, at each lapse of an hour, the musicians of the orchestra were constrained to pause " (pg2). This explains that the clock has an impact on the people there like death, with each hour more and more f those people are close to dying.

The story also stated, "But first let me tell of the rooms in which it was held. There were seven -- an imperial suite. In many palaces, however, such suites form a long and straight vista, while the folding doors slide back nearly to the walls on either hand, so that the view of the whole extent is scarcely impeded. Here the case was very different; as might have been expected from the duke's love of the bizarre. The apartments were so irregularly disposed that the vision embraced but little more than one at a time. There was a sharp turn at every twenty or thirty yards, and at each turn a novel effect. To the right and left, in the middle of each wall, a tall and narrow Gothic window looked out upon a closed corridor which pursued the windings of the suite. These windows were of stained glass whose color varied in accordance with the prevailing hue of the decorations of the chamber into which it opened. That at the eastern extremity was hung, for example, in blue -- and vividly blue were its windows. The second chamber was purple in its ornaments and tapestries, and here the panes were purple. The third was green throughout, and so were the casements. The fourth was furnished and lighted with orange -- the fifth with white -- the sixth with violet. The seventh apartment was closely shrouded in black velvet tapestries that hung all over the ceiling and down the walls, falling in heavy folds upon a carpet of the same material and hue. But in this chamber only, the color of the windows failed to correspond with the decorations. The panes here were scarlet -- a deep blood color. Now in no one of the seven apartments was there any lamp or candelabrum, amid the profusion of golden ornaments that lay scattered to and fro or depended from the roof" (pg 2). I think that this would symbolize the steps before death because the rooms start off as a happy color, but the end in a tortious deathly color.

Lastly the symbol would have to be the uninvited guest. The story said, "The mask which concealed the visage was made so nearly to resemble the countenance of a stiffened corpse that the closest scrutiny must have had difficulty in detecting the cheat. And yet all this might have been endured, if not approved, by the mad revellers around. But the mummer had gone so far as to assume the type of the Red Death. His vesture was dabbled in blood -- and his broad brow, with all the features of the face, was besprinkled with the scarlet horror" (pg 3). The uninvited guest symbolizes the red death and how it just kills people with ease.

After Reading the original title was supposed to be mask instead of masque, but I think that mask would have fit better because in the end the guy that ends up killing everyone is wearing the mask.

The ending also is supposed to be a blow to foolishness, which I find very smart of Poe to do because is a ploy against people who he doesn't with out actually saying anything.

The gothic tone that Poe wrote the story in is really hard to understand, and is really confusing to read.

The only suspense in the story only lasts one sentence, and really makes it that much more boring to read.

The climax is really a "killer" because Prospero faces death and dies.