Zamiya is using Smore newsletters to spread the word online.

Get email updates from Zamiya:

Significant Battles of the

Significant Battles of the

July 21, 1861 the first battle of the civil War begun. The name of this battle was called Bull Run or Manassas. The battle proved that this was not going to be a one sided war for either side, as was predicted. The battle spurred a sense of victory in the South, pushing them on, and in the North a feeling for revenge.

The battle of Shiloh was fought on April 6-7 1862 in Tennessee. This Could have been a huge victory for the Confederacy. However, with its loss and the immense loss of human life on both sides, leaders began to realize that the Civil War would not quickly end. 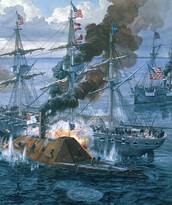 Battle of Hampton Roads: The Ironclads

The battle of The Ironclads was fought on March 9, 1862 in Virginia. It was history’s first duel between ironclad warships and the beginning of a new era of naval warfare. The Virginia’s spectacular success on March 8, the day before, marked an end to the day of wooden navies and raised hope in the South that the Union blockade might be broken.

The battle of Antietam Creek was fought on September 16-18, 1862 in Washington County, Maryland. The most obvious result of the battle was the incredible loss of

life. No other single day of American history before or since has been so deadly.Lastly, but most importantly, the small victory that Lincoln could claim for the battle of Antietam was enough for him to issue the Emancipation Proclamation.

The battle of Siege of Vicksburg

This battle was fought on May 18 - July 4, 1863 in Mississippi. With the loss of Pemberton’s army and this vital stronghold on the Mississippi, the Confederacy was effectively split in half. Grant's successes in the West boosted his reputation, leading ultimately to his appointment as General-in Chief of the Union armies. 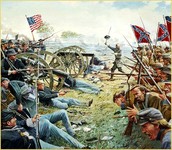 The Battle of Gettysburg

The battle of Gettysburg was fought on May 18- July 4, 1863 in Adams County, Pennsylvania. These ended the confederate offensive on the North. Confederacy divided politically over what the next step would be. The Gettysburg Address and the dedication was formed. It was a "new Nation" nor Union. Lincoln offering a conciliatory hand to the South.

Sherman's March to The Sea

The Sherman's March to The Sea was fought on May- December 1884. Sherman in his own Memoirs testifies to the conduct of his men, estimating that he had destroyed $80,000,000 worth of property of which he could make no use. This he describes as "simple waste and destruction." He was able to strike in the heart of the Confederacy and deal a physical and moral blow to the South. Mass destruction all along the way – both military and civilian targets. His victories from Chattanooga, Tennessee to Atlanta to Savannah, along with those of the other Union commanders were the beginning of the end for the Confederacy.

Zamiya is using Smore newsletters to spread the word online.