Alan is using Smore newsletters to spread the word online.

Where to setup Headquarters : By Alan Nguyen

Where to setup Headquarters : By Alan Nguyen

Houston is a good area to setup headquarters because of the large workforce, lots of refineries, lots of companies to trade with, and good ports to ship out stuff. Houston has a very large population of 2.24 million people, so there are lots of people to hire. And the population is growing more and more. Also, Texas has many refineries. We can make them or hire refineries and there are plenty of them to go around. Thirdly, there are a lot of companies in Houston. You need to not only trade with other states or countries, but you need to trade with other companies too, and Houston has plenty of companies to trade with. Finally, Houston has many ports. We will need to ship out our stuff to states and countries, and ports will be needed. And Houston has many good ports to ship stuff out. In conclusion, Houston is a good choice because of it's large work force, abundance of refineries, lots of companies, and good ports. Making Houston a good candidate.

The population is pretty high and is growing.

Each red dot is a oil refinery. 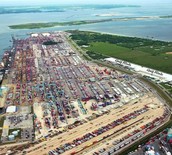 These ports are good for shipping out stuff and trading with other countries and states.

This port is a major and popular port and has been around for centuries.

This river has been used for trading for centuries, and still a major trading route today.

Along with Houston, New Orleans has a bunch of refineries.

The population is growing very fast.

The population is extremely low compared to US, and it is going down after the 1960s, but has increased steadily at the early 21st century, but too slow to catch up with Houston.

These are just some of the major companies in Houston, but there are many more than just these in the Houston area.

Alan is using Smore newsletters to spread the word online.