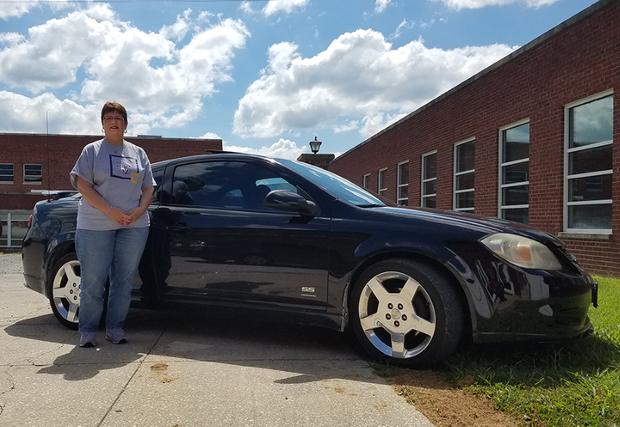 Kimberlin leads driven life in the business office, on the track

During the day, Maurica Kimberlin works hard at her desk at the Scott County School District 2 business office. She compiles the time cards turned in by employees, checks the payroll information for accuracy, deposits employee contributions into their health care savings accounts, and handles all the extracurricular accounts at Scottsburg High School.

“I’ve always enjoyed my job,” Kimberlin said, who has worked for the school district for more than four decades. “It’s interesting work.”

When the workday ends, the grandmother of six comes home to her 1966 Oldsmobile 442, a car she has raced on the straightaway pavement in increments of one-eighth of a mile. The classic muscle car has a four-barrel carburetor, four-speed transmission, and dual exhaust, making it perfect for drag racing as the car accelerates to 60 miles per hour in about six seconds.

“My husband is a motorhead. He taught me how to drive,” Kimberlin said about her starts in drag racing more than 40 years ago. “I can do the straight strip. I never got into the dirt track racing.”

Racing became a family activity for Kimberlin, her husband, and their children. The family would spend time at the racetrack — the children would stay in the pits as mom or dad raced the family’s Oldsmobile.

“He did it mostly,” Kimberlin said about driving the car during a race. “It was whenever I wanted to.”

When the family was not racing the car at the Ohio Valley Dragway, the family drove the car to work, school, and wherever they needed to go. It was their family car, and Kimberlin drove it every day to work at Scottsburg High School, where she was a secretary in the front office before working at the central office.

“The students would say, ‘It’s pretty sad when the hottest car in the parking lot belongs to the secretary.’,” Kimberlin said with a laugh. “It was the only car I had.”

Not only did Kimberlin’s car shine on and off the track, but her car also helped her catch some juveniles who stole her son’s car and were joyriding it around Scott County.

One morning before school, Kimberlin’s son, Chris, noticed his car was missing from the family’s driveway. The family called the authorities and reported the theft before heading to school and work that day more than 20 years ago.

As Kimberlin was heading to SHS, she saw her son’s stolen car headed toward her on State Road 356. The drag racer inside of Kimberlin kicked into gear as she took on this high-speed challenge. Using the horsepower and the torque of her 442, Kimberlin caught up with the juveniles behind the wheel of her son’s car. The teenagers tried to lose her as they turned on Slate Ford Road, but Kimberlin’s quick reflexes kept her son’s car in her sights. The pursuit eventually ended in a corn field, and the joyriders abandoned the car and took off on foot into the field.

“The car was not damaged. They stopped it before going too far into the corn field. We were able to get his car back,” Kimberlin said.

Today, Kimberlin and her husband take the family’s classic car to shows and cruise-ins rather than racing it down the straightaway. They share their love of automobiles with their grandchildren.

“We follow our grandchildren around now,” Kimberlin said with a smile.

At Scott County School District 2, Kimberlin’s story is our story. Your story matters. You matter. 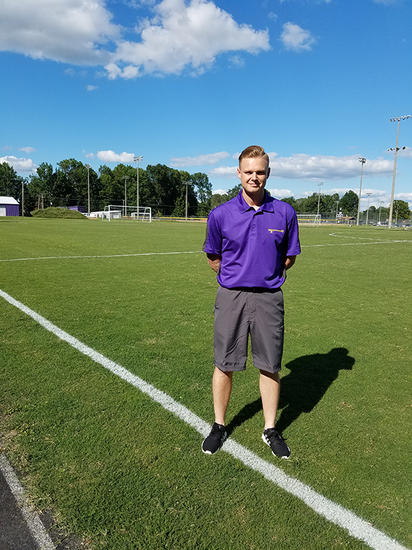 After serving two tours in Afghanistan as a soldier in the British Army, Sam Hopwood followed his heart to Scott County.

“I have a heart’s desire to get involved in coaching soccer,” Hopwood said.

Before becoming the boys soccer coach at Scottsburg High School, Hopwood started by coaching at the club soccer level with the Scott County Strikers.

“I was amazed how big high school sports are over here,” Hopwood said.

In Europe, soccer — or football as it is called around the world except for in the United States — starts early in a child’s life and is a traditional sport for people to play, like children in the United States play baseball, basketball, or American football. The professional European football teams have academies, where children ages 6 to 16 are asked to join to continue to grow in their skills and in the sport. The academies are the key in Europe to moving forward to elite at the professional level, whereas, in America, colleges provide athletic scholarships to top high school players and some high school and college level players move forward to professional athletics.

“They will nurture you,” Hopwood said about the European football academies.

Hopwood, who grew up on the English and Welsh border near Wales in the United Kingdom, participated in a few European football academies as a child before moving on to playing soccer in college and for the British Army.

Then, Hopwood found a passion in coaching after moving to Scott County to be with his wife and his family after he fulfilled his military contract.

“Coaching — it’s new to me since I came over here. I absolutely love it,” Hopwood said. “The sport is growing at a tremendous rate. The talent is coming through. It’s a very exciting time.”

As the soccer coach at SHS, Hopwood is working to build the program and to teach the students the English way of playing soccer.

“I want to build a stable program,” Hopwood said. “I am implementing life skills.”

Teamwork is also important to Hopwood and his team.

“If you don’t have a team, you won’t be successful,” Hopwood said. “I demand 110 percent of the boys at all times.”

Still, Hopwood said there is one thing he cannot teach his team, but he said the students on his team already possess it: heart and determination.

“There’s a lot more than passing and moving,” Hopwood said. “My lads have a lot of heart and determination.”

At Scott County School District 2, Hopwood’s story is our story. Your story matters. You matter.

Follow Tammy Mosier
Contact Tammy Mosier
Embed code is for website/blog and not email. To embed your newsletter in a Mass Notification System, click HERE to see how or reach out to support@smore.com
close