F is using Smore newsletters to spread the word online.

Get email updates from F:

The followers of Judaism are called Jews. Jews believe that God made a covenant with Abraham and his lineage, that God would make them a sacred people and give them a holy land. The Jewish people central beliefs are around the Ten Commandments that come from the Torah. They are don’t worship other gods, don’t make images to worship, don’t misuse the name of God, keep and observe the Sabbath (Saturday), honor your mom and dad, don’t murder, do not commit adultery, don’t steal, don’t accuse or lie about others and don’t envy others. The Jewish people worship at a synagogue which is also called a temple or shul. The synagogue is the center of the Jewish community: a place of prayer, study and education, social and charitable work, as well as a social center. The synagogue is run by a board of directors composed of the lay people. They take care of the synagogue and hire a rabbi (priest) and a chazzan (choir leader). The Hebrew Scriptures are called the TANAKH, which is the Hebrew acronym for the three different parts: The Torah which is the first five books of the Old Testament, The Nevi'im which are the books of the prophets and Ketuvim which are the remaining writings. One of the Jewish holidays is Chanukah, which is an 8 day holiday commemorating the rededication of the Holy Temple (the Second Temple) in Jerusalem at the time of the Maccabean Revolt of the 2nd century BCE. The 4 main holy cities for the Jewish people are: Jerusalem, Hebron, Safed and Tiberias. Jerusalem is the holiest where King David built the Holy Temple, Hebron is the burial place patriarchs such as Abraham, Sara and Isaac, Safed was were many Jews went after getting expelled from Spain in 1492 and Tiberias is where the Messiah will rise from the lake of Tiberias.

Judaism, Islam, and Christianity are sometimes called "Abrahamic religions" because they trace their history to Abraham in the Hebrew Bible. The beliefs of all three religions is that there is only one God.

The synagogue is the center of the Jewish community: a place of prayer, study and education, social and charitable work, as well as a social center. 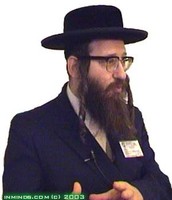 Rabbi's are hired by a board of directors to be the spiritual leader of the synagogue. 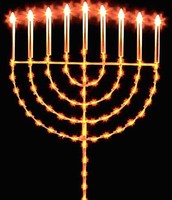 The menorah is a symbol of the nation of Israel and its mission to be "a light unto the nations."The sages emphasize that light is not a violent force; Israel is to accomplish its mission by setting an example, not by using force. 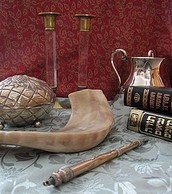 Jewish ceremonial art refers to an array of objects used by Jews for ritual purposes. Because enhancing a mitzvah by performing it with an especially beautiful object is considered a praiseworthy way of honoring God's commandments.

The Torah is one of 3 holy Hebrew scriptures. The Torah is the first five books of the Old Testament.

Jerusalem is the holiest where King David built the Holy Temple.

Hebron is the burial place patriarchs such as Abraham, Sara and Isaac

F is using Smore newsletters to spread the word online.