Theodore Roosevelt's most famous project during his presidency was the building of the Panama Canal. The canal split North and South America and saved many thousands of miles for ships traveling from the Atlantic to the Pacific Ocean. Before he could begin construction he needed to receive permission from Columbia.

Construction Of the Canal 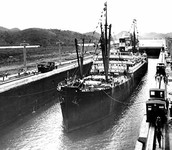 Maiden Voyage on the Canal by the Ancon in 1914 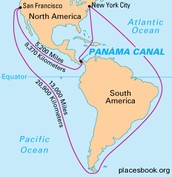 Roosevelt knew that people of Panama wanted to break away from Columbia and he saw that as a way to get his plan accomplished. He sent a letter of support to the leaders of the rebellion in Panama and then sent war ships down to show Columbia that they were serious. Although the ships never engaged in any warfare, the message was clearly sent and Columbia left Panama alone. Roosevelt was then able to move forward with his plan. This was called his "Big Stick Diplomacy" by many of his critics because he used force to get what he wanted accomplished instead of normally talking with the leaders of Columbia like leaders had done in the past.

Timelapse of a cruise ship traveling The Panama Canal

Panama Canal Timelapse
The actual construction of the canal was a very long and difficult process that many countries did not have the money nor the engineering ability to accomplish. The French had actually begun the process once before the United States and failed to finish. The canal was finished in 1914 and in 1999 the U.S. gave ownership of the canal to Panama.