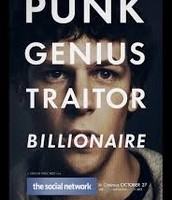 A movie about Zuckerberg's betrayal of the Winklevoss Twins

interested in. Soon after it was made, it spread to colleges around the country. By 2005 it had spread to highschools. In 2006 it was opened to the general public and had 12 million users. By 2012 it had 1 billion users. In 2010 a movie called 'The Social Network' was made about Mark Zuckerberg stealing the idea of Facebook from the Winklevosse twins. In 2010 the like button was invented, leading other websites to start using it as well.

Mark Zuckerberg is slightly awkward, due to his Ausbergers. He has been described by his coworkers as a hard to work with because he pushes people, expects debate and is non sentimental. He is portrayed in The Social Media as having no social skills and being ruthless. He is diligent and he dreams big.

Mark Zuckerberg is successful because he's willing to take a risk. He dropped out

of college to follow his dream, and became more successful because of it. He also