lakendra is using Smore newsletters to spread the word online.

Get email updates from lakendra:

James A. Garfield did not jump right into office, just like any other president he had other things he had going on before his term in office. Garfield was very interested in politics as a young man, he served in the army. There are a lot of things he had planned before going into office. 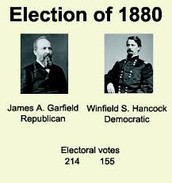 When he was first signed to office

this is a picture of president garfield when he was first signed to office.

Him, His Wife And His Seven Kids

Him and his wife Lucretia Garfield had seven children together.

On his death bed

president James A. Garfield lived a long 11 weeks before he finally passed away on September 19, 1881.

lakendra is using Smore newsletters to spread the word online.