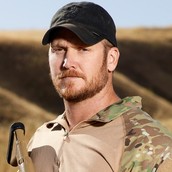 A large and maybe not so obvious theme in this book is a soldiers outlook on serving his country. How despite maybe Kyle's personal opinion wasn't supporting the war but he still supported his country. i liked how really Chris Kyle wasn't very enthusiastic about the cause of being in Iraq until he had been there awhile and was sucked in by the environment and he adapted to how he would have to live his life to if he were to be a Navy SEAL.

“The joke was that President Bush only declared war when Starbucks was hit. You can mess with the U.N. all you want, but when you start interfering with the right to get caffeinated, someone has to pay.”

The president only got upset when you messed with his coffee, or things immediately relevant to his daily life.

“Great way to fight a war - be prepared to defend yourself for winning.”

Even if they win the war that may cause even more of an uproar. Defenses can’t go down because of victory.

“Savage, despicable evil. That's what we were fighting in Iraq.”

Kyle’s opinion of the state of the terrorists in Iraq is the most relevant since he was the one perched at a building watching and ready to shoot.

“Marines—you beat them down and they come back for more.”

Marines are hardcore, despite their main purpose being to take bullets.

“The thing we all had in common wasn’t muscle; it was the will to do whatever it takes.”

The team he was with was just as motivated as he was to defend their country.

“MY REGRETS ARE ABOUT THE PEOPLE I COULDN’T SAVE—Marines, soldiers, my buddies. I still feel their loss. I still ache for my failure to protect them.”

Kyle’s PTSD affected him for the rest of his life because of what he did for our country,

“In my experience, Marines are gung ho no matter what. They will all fight to the death. Everyone of them just wants to get out there and kill. They are bad-ass, hard-charging mothers.”

Marines are the bullet sponges of our military. While Navy Seals are for specialized situations, Marines are for hunt and kill.

“anyone who has a problem with what guys do over there is incapable of empathy. People want America to have a certain image when we fight. Yet I would guess if someone were shooting at them and they had to hold their family members while they bled out against an enemy who hid behind their children, played dead only to throw a grenade as they got closer, and who had no qualms about sending their toddler to die from a grenade from which they personally pulled the pin—they would be less concerned with playing nicely.”

American society doesn’t want to think about the reality of war.

“They had signs about baby killers and murderers and whatever, protesting the troops who were going over to fight. They were protesting the wrong people. We didn’t vote in Congress; we didn’t vote to go to war. I signed up to protect this country. I do not choose the wars.”

People blame soldiers for going to war but really soldiers are just serving their country despite their opinion of what’s going on.

“There's no reason someone who has fought for their country should be homeless of jobless.”

Veterans aren’t treated as they should be in this country.

American Sniper is an autobiography by Navy SEAL Chris Kyle, one of the most renown snipers in the history of the US military. Kyle’s register claims to have killed a record 160 people. The story goes through his four tours in Iraq and he describes his life as a sniper, being tucked away on roofs and in high buildings ready to shoot as soon as a threat comes to anyone in his team. You also get an exclusive look into the current military mindset, and how you’re forced to think while you’re in the field. A lot of Kyle’s main concerns throughout the book is on his fellow SEALs or Marines he is working with, or his mind is focused on his wife and growing family. His book was created into a bestselling film in 2014, a year after the tragic shooting killing Kyle and a friend in 2013, and two years after he had published his autobiography. This book isn’t about pro-war propaganda or about a “Kill all Muslims” attitude like the media may describe it as, but really is a modern account of our evolving world when it comes to war and how even the most elite still lay in there bunk and miss the family they had to leave behind to fight a war they may have not believed in. I would recommend this book to anyone American, because if you just keep the shutters over your eyes and pretend our military doesn’t go through hell every day then you can’t truly say you support our troops.