Angelo is using Smore newsletters to spread the word online.

Get email updates from Angelo:

Persecution of the Masses

Khmer Rouge party leader "Pol Pot" planned to nationalize and centralize the farming society of Cambodia in 1975. This eventually began the slow eradication of over 25 percent of Cambodia's population in less than three years. It all began with the Khmer Rouge's overthrow on the Lon Nol government. It ended in 1978 when the Vietnamese overthrew the Khmer Rouge from their spot in government. Karma, right? The photo to the right is a prisoner log containing all captives in just one of their Killing Fields.

The Killing Fields in Cambodia

Lined up for Death

Like the Holocaust, many people were lined up by ditches where they were killed and dumped in them.

These skulls belonged to victims of the Cambodia Genocide. They were lined up for prisoners to remember what would happen if they stepped out of line.

When the Vietnamese overthrew the Khmer Rouge regime, they took photos of the hastily butchered Cambodians that were left. These quick tortures were the Khmer's last attempt to finish the rest of the Cambodians off. 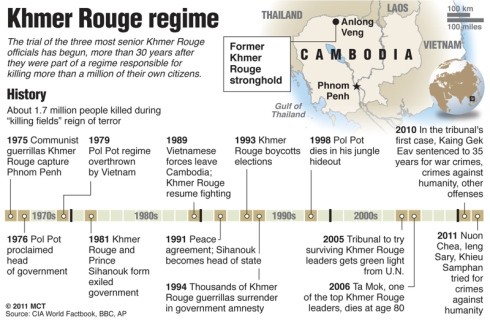 This photo shows the timeline of events involving all members and actions lived out by the Khmer Rouge regime. The majority of events and dates take place after the initial genocide. These dates are points in time when a leader or commander was tried, convicted, or even died.

Criminal Court for Cambodia: Establishment of Extraordinary Chambers Responsible for the Prosecution of Crimes Committed by the Khmer Rouge in Cambodia. Trial. June 6, 2014

Angelo is using Smore newsletters to spread the word online.