connor is using Smore newsletters to spread the word online.

Get email updates from connor:

Levi Strauss was born February 26, 1829 – September 26, 1902 and was an American businessman of German and Jewish descent who founded the first company to manufacture blue jeans. His firm, Levi Strauss & Co. began in 1853 in San Francisco, California. 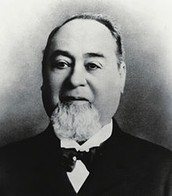 Photograph of his younger days

The back label on pair of Levi Strauss Jeans

Levi's sister Fanny and her husband David Stern moved to St. Louis, Missouri, while Levi went to live in Louisville and sold his brothers' supplies in Kentucky. In January 1853, Levi Strauss became a USA citizen.

The family decided to open a West Coast branch of the family dry goods business in San Francisco, which was the commercial hub of the California Gold Rush. Levi was chosen to represent the family and he took a steamship for San Francisco, arriving in early March 1853, where he joined his sister's family.

Jacob Davis, one of Strauss's customers and inventor of the first pair of riveted denim pants, went into business with Strauss to produce blue jeans. The two men patented the new style of work pants in 1873.

Death of a Blue Jean maker

Levi Strauss died on September 26, 1902 in San Francisco at the age of 73. He never married, so he left the business to his four nephews, Jacob, Sigmund, Louis, and Abraham Stern, the sons of his sister Fanny and her husband David Stern. He also left bequests to a number of charities such as the Pacific Hebrew Orphan Asylum and the Roman Catholic Orphan Asylum. Levi's fortune was estimated to be around 6 million dollars (about $163,546,154 in 2014 dollars). He was buried in Colma, California.

A Levi Strauss museum is maintained in Buttenheim, Germany, located in the 1687 house where Strauss was born. There is also a Visitors Center at Levi Strauss & Co. world headquarters in San Francisco, which features a number of historical exhibits. There is a Levi Strauss Foundation starting with an 1897 donation to the University of California, Berkeley.

connor is using Smore newsletters to spread the word online.