Organisms in a community are linked through what they eat and what eats them. A food chain is a single pathway connecting a producer with several levels of consumers. In a typical marine food chain, dinoflagellates convert energy from sunlight into food through photosynthesis and store it in their tissues. Copepods feed on dinoflagellates and incorporate this energy into their own tissues. The energy is transferred to sunfish when they feed on copepods, to small sharks that feed on sunfish, and to large sharks that feed on small sharks. The feeding relationships in an ecosystem consist of many food chains interconnected into a network called a food web.

Throughout human existence we have relied on the oceans – for food, as a waste dump, for recreation, for economic opportunities and so on. However, it’s not only our activities in the marine environment that affect life in the sea – it’s also the things we do on land. With more than half the world’s population now living within 100 kilometres of the coast, it’s not surprising that our activities are taking their toll. Human impacts have increased along with our rapid population growth, substantial developments in technology and significant changes in land use. Over-fishing, pollution and introduced speacies are affecting life in the sea! Several types of life forms form the food web. Green plants that can make their own food through photosynthesis are the web's producers. They form the bottom of the chain. Animals that get food from other animals and plants are consumers. Decomposers feed off dead plants and animals because decomposers cannot make their own food. Every member in the food web is a predator, prey or both. For instance, one predator may become the prey for another predator. 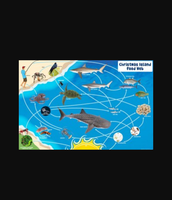 It's a shark eating fish and other fish. 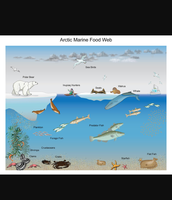 It's showing you how every thing eats one another. 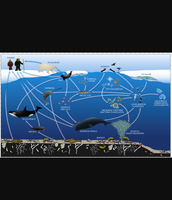 Shows what eats what to keep stuff in balence.

[Consumers are described as heterotrophic, which means they are unable to make their own food and rely on consuming other organisms or absorbing dissolved organic material in the water column.]