Herodotus - The Gnome of Sofia

The last of the cold war spy novels

Herodotus - The Gnome of Sofia

The last of the cold war spy novels 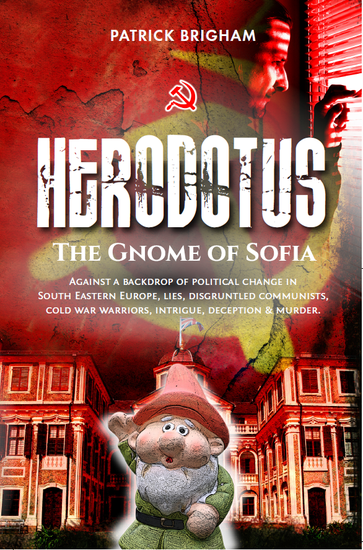 There are few books written by expatriates who have spent some time in Sofia that give a sense of time and place, post-communist era, in the Bulgarian capital; notable mentions must include John Hamilton’s The Good Balkans and Randall Baker’s Bulgariana.

The books by Hamilton and Baker are both memoirs, a genre that in relation to the heady days of Bulgaria’s transitions, so far outnumber novels.

Patrick Brigham, whose resume in Bulgaria includes having been the editor-in-chief of an English-language publication The Balkan Western News in the 1990s, fortunately has now added to the canon of fiction with not one but two novels – Herodotus: The Gnome of Sofia, and Judas Goat: The Kennet Narrow Boat Mystery.

With both novels, but especially the first-mentioned, Brigham has presented a challenge to anyone who would seek to add to the list of novels set in a Bulgaria redolent with the sense of sometimes anarchic change and eccentricities of a society populated by characters peculiar to their times.

One such character is Sir Arthur Cumberpot, fictional British ambassador in Sofia in 1996, and the protagonist of Herodotus: The Gnome of Sofia.

Through the device of nimble leaps back and forth in time, Brigham takes us through the career of Cumberpot, from the modest suburbia of post-war Croydon to the punting and partying of Oxford in the 1960s, the beginnings of an ultimately doomed marriage to odious harridan Annabel and on, falling into the FCO and acquiring a posher accent and mannerisms, to a place as the Ambassador from the Court of St James in the Bulgarian capital.

The plot device that sets a chain of events of increasing absurdity in train is Herodotus, quite literally a gnome, received at the embassy with horror by Cumberpot as a gift from a doting if distanced father, but whose place in the garden is secured by the machinations of Britain’s secret services.

Along the way, we meet other characters as Brigham weaves a fabric of ever-deeper absurdities, doing so in the finest traditions of British humorous writing, not sparing the colourful characters of Bulgarian political and diplomatic society as the narrative unfolds.

His reach in the wider context is adept, awarding Annabel a birth father who was a defector to the Soviets, a back story reminiscent – although this is not part of the plot – of communist-era documentation relating to visits to Black Sea resorts of yore by one Kim Philby.

To say more than this would be to give too much away about a novel well deserving of a read by anyone who has spent time in Bulgaria and who would nod and chuckle at many of the references. That is not to say that the tale of Herodotus would not be appreciated by anyone with a taste for comic writing.

Facebook @PatrickBrigham
Patrick Brigham was the Editor in Chief of the first English Language news magazine in Bulgaria between 1995 and 2000. As a journalist he witnessed the changes in this once hard core Communist Country and personally knew most of the political players, including the old Dictator Todor Zhivkov and his successors Zhelev and Stoyanov. Traditionally a hotbed of intrigue and the natural home of the conspiracy theory, Bulgaria proved to be quite a challenge and for many the transition was painful. Despite this, he personally managed to survive these changes and now lives peacefully in Northern Greece. A writer and journalist for many years, he has written a number of short stories and articles which might be better described as light hearted, whilst confirming that the truth is often stranger than fiction.
Rizia, Evros, Greece patrick.brigham@gmail.com +30 6984079020 AuthorPatrickBrigham.com

What is the story of Herodotus - The Gnome of Sofia?

Against a backdrop of political change in South Eastern Europe, the story embraces disgruntled communists, cold war warriors, intrigue, deception and finally murder. Sir Arthur Cumberpot has an unspectacular career which is swiftly drawn to a close when he is appointed British Ambassador to Bulgaria. Due to some unforeseen mishaps his wife Annabel is accused of being a spy and sent home to their house in Watlington while her background is checked by MI5. Annabel is guilty of nothing, other than being the biological daughter of Jim Kilbey, Britain’s most famous spy. It seems that a jealous god has sought to visit the sins of the father upon her, but so has everyone else. She is the victim of serendipity, but also of cover ups, the duplication of thin evidence and exaggeration. But she is also heartless, treacherous, self indulgent and without shame.