World War one is often depicted to be a series of senseless battles where infantry would run across open fields only to be slaughtered by machine guns and artillery fire , in the Western Front. A conception that seems to be prominent, is that there seemed to be little innovation in tactics. One of Germany's division commanders named Wilhelm Balck had written many articles and manuals on tactics before World War 1. Wilhelm stated "Bullets quickly write new tactics."(28)

The war became more of a maneuverable war rather than positional at the time after the Battle of the Marne in 1914 and Germany's consequent retreat. The goal of both powers (Central and Entente) was to penetrate the enemy's main defensive lines and exploit and breakthrough. The unique warfare during the Great War made this difficult to earn. So many new weapons came out throughout the war. None that had ever been seen by the world on any battlefield ever, such as any airplane, tank, and poison gas. Even some old weaponry that suddenly became practical enough to use on a world wide scale came back into use.(29)

During WWI hand grenades became a practical weapon to use world-wide for the first time. Replaced the bayonet for weapon of choice for clearing an enemy trench or to destroy a strong point.

Machine guns became more more mobile and were used in greater numbers during WWI. They fired heavier shells greater distances than before.

First developed in World War I for artillery support on a squad level.

Many different armies were nearly exhausted as a result of trying to break the stalemate by 1917. France's losses at Verdun in 1916 and the mutiny of 1917 had made the French army offensively helpless. The combination of he Battle of Passchendaele and the Battle of Somme bled the British army white. Germany had an astounding casualties crippling the Allies offense. Due to the Treaty of Brest Litvosk though, the German Army on the Western Front was reinforced with nearly -fifty five divisions. With this new found strength the German armies believed they could make a last offensive operation and hopefully force a favorable peace before he weight of the American army could be brought to bear.(30)

In 1918 many myths had been talked about for the Germans Spring Offensive. The myth was that the German's were using stormtroop tactics that were new and innovative and nearly won them the war because of British 5th Army did not know how to handle these new tactics.(31) 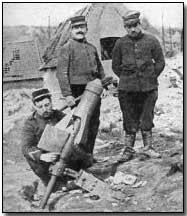 John J. Pershing was a General of the Armies during the Great War. He lived from 1860 to 1948. John was also known as "Blackjack" for a nickname. General of the Armies is the highest rank ever to be held in the United States Army. In 1915 and 1916 Pershing unsuccessfully pursued Pancho Villa. This was know as the Punitive Expedition where they went through northern Mexico.(32)

During World War I in Europe, john was in command of the American Expeditionary Force. He led the American Expeditionary Force in Europe. General Perishing had nearly two million soldiers under his authority. This is more troops than any general had been in charge of in American history. He kept American troops independent, despite the requests to put American forces under a foreign leader. John Perishing was not a brilliant tactician, but his troops he led helped turn over World War I to the Allies. Also Perishing was smart in the sense that he did not allow American soldiers to enter the line unless they were fully trained. This saved countless lives in battles.(33)

In a later time and career for Perishing he was an important key to formulating a plan for roadways. This plan would later form the base for the Interstate Highway System.(34) 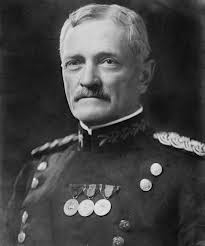 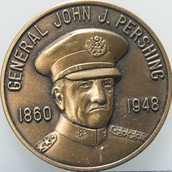