Volcanoes often look like peaceful mountains, but there is a major component that tells them apart, Volcanoes contain magma and gases which build up pressure until the volcano explodes. There have been many famous explosions in history, including Mt Vesuvius and Mt St Helens. In 79 AD when Mt Vesuvius exploded and buried the city in ash, it buried the city alive, and killed many of the city's people. When Mt St Helens erupted in 1980 in completely obliterated the surrounding area. Volcanoes are so dangerous because the lava and gases it releases are enough to kill humans and animals. Lava damages what it touches beyond repair, National Geographic said, "volcanoes tend to exist along the edges of between tectonic plates", and, " about 90 percent of all volcanoes exist within the Ring of Fire." Volcanoes can form on land and underwater, and are very dangerous in each location. Volcanoes are measured by geologists and seismographs. There is no really good way to protect yourself from volcanoes other than listening when you are told to evacuate, knowing the warning signs, and not living near an active volcano. 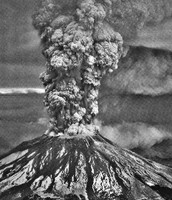