Marilah is using Smore newsletters to spread the word online.

Get email updates from Marilah:

White blood cells are an important part of the immune system. These cells help fight infections by attacking bacteria, viruses, and germs that invade the body. White blood cells originate in the bone marrow, but circulate throughout the bloodstream. There are five major types of white blood cells. 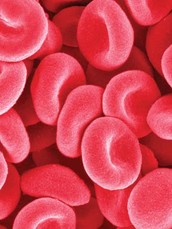 Red blood cells are made inside your bones, in the bone marrow. They typically live for about 120 days, and then they die.Red blood cells cellular component of blood and millions of which in the circulation of vertebrates give the blood its characteristic color and carry oxygen from the lungs to the tissues.

BLood plasma is the liquid portion of the blood, 92% water and transport nutrients, gases, vitamins, maintain fluid and electrolyte balance, and pH

Plasma Proteins the three types are Albumins, Globulins, and Fibrinogen.

Hemostasis the process of stopping bleeding. Involves coagulation and the clotting of blood to seal site of damage.Thrombin causes change of fibrinogen to fibrin, which trap platelets and blood cells to form a hematoma

Plasma is the clear, straw-colored liquid portion of blood that remains after red blood cells, white blood cells, platelets and other cellular components are removed. It is the single largest component of human blood, comprising about 55 percent, and contains water, enzymes, antibodies and other proteins.

Platelets are small colorless disk-shaped cell fragment without a nucleus, found in large numbers in blood and involved in clotting.Platelets also form bruises which may be caused when you fall down hard, but don’t pierce or cut the blood cell. The black and blue color of a bruise is because platelets rush over and start a chemical reaction and make a dark shading underneath the skin.

Marilah is using Smore newsletters to spread the word online.