Pablo is using Smore newsletters to spread the word online.

Get email updates from Pablo:

The battle of Princeton (January 3, 1777) was a strategic victory for the revolutionary forces of General Washington on the British forces near Princeton, New Jersey. The site is administered as a State Park operated and maintained by the New Jersey Division of Parks and Forestry. 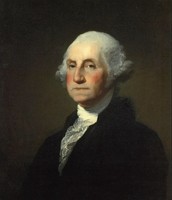 George Washington (February 22, 1732 [O.S. February 11, 1731][Note 1][Note 2] – December 14, 1799) was the first President of the United States (1789–1797), the Commander-in-Chief of theContinental Army during the American Revolutionary War, and one of the Founding Fathers of the United States.[3] He presided over the convention that drafted the United States Constitution, which replaced the Articles of Confederation and remains the supremelaw of the land.

The Princeton Battlefield in Princeton, Mercer County, New Jersey, United States, is where American and British troops fought each other on January 3, 1777 in the Battle of Princeton during the American Revolutionary War. The battle ended when the British soldiers in Nassau Hall surrendered.[3][4]This success, shortly after Washington's crossing of the Delaware River and capturing the troops at the Old Barracks in Trenton, helped improve American morale.

On the night of January 2, 1777 George Washington, Commander-in-Chief of the Continental Army, repulsed a British attack at the Battle of the Assunpink Creek in Trenton. That night, he evacuated his position, circled around General Lord Cornwallis' army, and went to attack the British garrison at Princeton.

Pablo is using Smore newsletters to spread the word online.