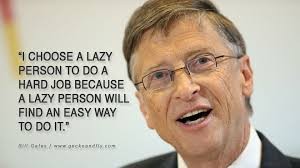 William Henry "Bill" Gates III (born October 28, 1955) is an American business magnate, philanthropist, investor, and computer programmer.He went to Lakeside School for high school and for University he went to Harvard but stopped halfway.In 1975, Gates and Paul Allen co-founded Microsoft, which became the world's largest PC software company. During his career at Microsoft, Gates held the positions of chairman, CEO and chief software architect, and was the largest individual shareholder until May 2014.Gates has authored and co-authored several books. His net worth is about $79.2 billion dollars. His characteristics are creative, smart, courageous, determined,crazy.

Bill Gates is worth about 85 Billion

Microsoft Corporation (Microsoft) is an American multi national technology company headquartered in Redmond,Washington, that develops, manufactures, licenses, supports and sells computer software, consumer electronics and personal computers and services. Its best known software products are the Microsoft Windows line of operating systems , Microsoft Office office suite, and Internet Explorer and Edge web browsers. Its flagship hardware products are the Xbox game consoles and the Microsoft Surface tablet lineup. Since it's profit doubled in one year it is the world's largest software company by their revenue, and one of the world's most valuable companies.