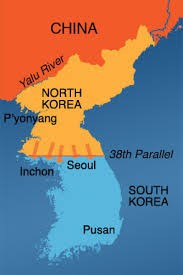 Causes - Korea was occupied by Japan until the end of WW2. After the end of WW2, Korea was divided by the US to the south and Russia/China to the North similar to what happened in Germany. The two countries were divided at the 38th parallel and this was to ensure a neutral zone between the two super powers.

Characteristics - In 1950, North Korea invaded South Korea pushing all the way to the tip of the peninsula in a matter of months. The US would soon intervene by landing in Incheon, not too far south of the 38th parallel. With the help of the US, the South pushes back up to the Chinese border. The Chinese then intervened and pushed back down to the 38th parallel. The rest of the war was fought along this line where an armistice was signed in 1954. About 5 million people were killed while 40,000 American Soldiers died and 100,000 were wounded.

Significance - The Korean war was basically a miniature war of the Cold War with South Korea backed by NATO, a communist free organization and while North Korea was backed by the USSR and China, two communist parties. The Korean War was an example of the US policy of containment in action. The purpose of the policy was to "contain" communism where it existed and not let it spread over any other areas in the world.

Crossing at the 38th parallel

Memorial for The Korean War