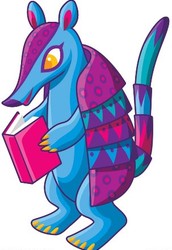 Our Scholastic Book Fair theme - Book Fair Fiesta: ¡Yo Quiero Libros! ¡Vamos a Leer! (I Want Books! Let's Go Read!) –surrounds students in the celebration of reading with hundreds of fun, engaging, affordable books for them to discover. Giving kids access to good books and the opportunity to choose their own books will motivate them to read more. And like most acquired sills, the more kids practice reading, the better they’ll get.

We look forward to having you participate in our Fair, and remember, all purchases benefit our school library!

*We accept cash, checks (made payable to Fork Shoals School), and all major credit cards. 6% tax will be added to all purchases. No returns or exchanges.*

Have you ever taken a selfie? Well, go one step further, and take a "shelfie!" What's a "shelfie?" It's a picture of you in front of your bookshelf! Ms. Knight is creating a display of "shelfies," and she wants your pictures! The display features teachers, students, and even family members! 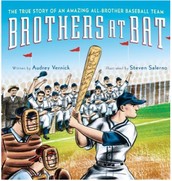 Book of the Week: Brothers at Bat

Brothers at Bat: The True Story of an Amazing All-Brother Baseball Team is a nominee for the 2013-2014 South Carolina Picture Book Award.

Brothers at Bat, written by Audrey Vernick and illustrated by Steven Salerno, is the true story of an all-brother baseball team. This awe-inspiring story tells of the Acerra family of New Jersey and the twelve brothers who formed their own baseball team…and still left brothers on the bench!

The Acerra brothers played baseball in the 1920s, 30s, 40s, and into the 50s. Several of the brothers took time away from their beloved sport and family to join the war effort during World War II, but all of them came back home and continued to play as a family team.

The Acerra brothers played their last game as a team in 1952, but they continued to share the importance of teamwork with their children and grandchildren. In 1997, the brothers were inducted into the Baseball Hall of Fame as the longest-playing all-brother team.

The author’s note at the end of the book provides more information about this remarkable team of brothers and the family values that kept them as a team even when they no longer played baseball as one. Brothers at Bat sends a message to readers of all ages that teamwork–whether in sports, school, family, or any other aspect of life–is truly vital and has the power to make amazing things happen.

Please join us on Monday, January 27th, for Family Math & Science Night. There will be a variety of hands-on math and science activities to participate in, and the Book Fair will be open. Join us for this fun night!

This will be the absolute last week to order yearbooks. Don’t miss out in getting yours ordered.

As an IB World School, we want to promote diversity, open-mindedness, and keep our kids thinking, researching, and inquiring. Our Social Studies Committee has come up with a plan to celebrate Black History Month. Teachers will send a link with questions, and they will also be available on the school website. Feel free to research the answers with your student. Students that provide a correct answer to any of the questions will be in the drawing for some funtastic prizes. Multiple names will be pulled each Friday during the month of February on the morning news! Good luck!