Get email updates from Angie: 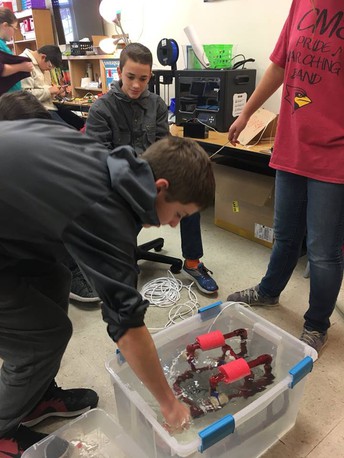 It was ballasting day in Mrs. Hill's STEM class at Clinton Middle School!

Students collaborated with their peers and made modifications to their flotation devices to find the ideal buoyancy.

Students are excited to take their creations to the pool next week for testing. 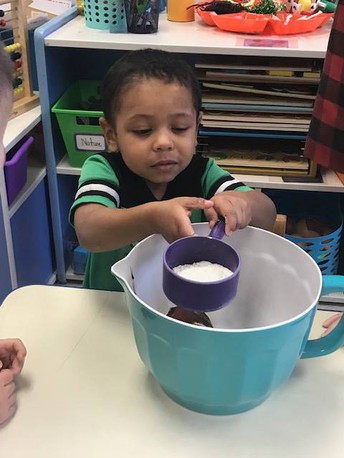 Students in Ms. Jenni's CECC class recently read, “The Gingerbread Man Gets Loose in the School“.

After their book study, students spent time making gingerbread cookies, and in the process learned about the concept of measurement. While allowing the cookies to cool, students were surprised to find out that their gingerbread man cookies had ran away!

Students worked on their writing skills by creating "missing posters" to hang up around the school. The next day the children had a note from the gingerbread man, which led them on a scavenger hunt around the building to find their missing cookies.

Students were then finally able to decorate and enjoy their cookies. 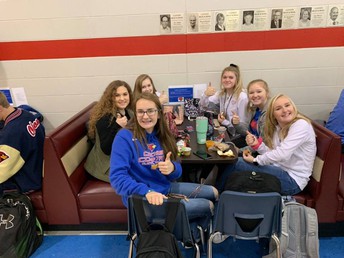 Students at Clinton High School were welcomed back to school recently with a new seating area in the cafeteria.

These booths are an added incentive for students who have earned a Cardinal Card. Cardinal Card holders must meet school guidelines on attendance, behavior, participation, character, etc.

Looks like the booths are already a hit with students! 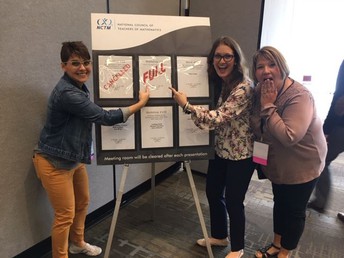 Congrats to two Clinton Middle School math teachers who were chosen to present at the National Council of Teachers of Mathematics (NCTM) Regional Conference in Kansas City.

Mrs. Combs and Mrs. Roskop presented to teachers from all across the nation on building student understanding of proportions through making connections from the previous grade level and intuition.

In addition, Mrs. Combs was asked to present at the Infinity Bar, located at the NCTM Exhibit Hall. The Infinity Bar was designed for experts in the field of mathematics to be available to talk to teachers about issues related to mathematics. Emily chose to present on the book she co-authored, as well as routines/strategies that improve student understanding through the formative assessment process.

*CHRISTMAS BREAK-This year's Christmas Break will begin with an EARLY DISMISSAL on Friday, December 21st (early dismissal times can be found on the district website). CECC will not be in session on December 21st. School will resume on Thursday, January 3rd.

*REPORTS AVAILABLE-Individual Student Reports (ISR) from the 2018 Spring Missouri Assessment Program (MAP) and End of Course (EOC) assessments will be sent out with report cards in January. If you would like to pick up your child's ISR early, they will be available at the building your child attends.

Your child’s ISR includes an Achievement Level, which will describe the performance as Below Basic, Basic, Proficient, or Advanced. The report will also include a short description of the knowledge and skills that are typically demonstrated by students in each Achievement Level.

These reports are typically made available in the summer/fall after spring testing, but were delayed at the state level for all school districts.

*NOTICE OF SCHOOL BOARD FILING-The Board Secretary of the Clinton School District #124 will accept declarations of candidacy from any person interested in running for a position on the Clinton Board of Education to be elected at the annual election on April 2, 2019.

There are three positions available, two 3-year terms and one 2-year term. Candidates must be citizens of the United States and resident tax payers of the district, who have resided in this state for one year preceding their election or appointment, and who are at least twenty-four years of age. All board members initially elected or appointed in this succeeding election shall successfully complete sixteen hours of orientation and training as required in Section 162.203 RSMo.

*SNOW DAY MAKE-UPS-Due to the two weather-related closings the district has had, the last day of school is currently May 17th.

*INCLEMENT WEATHER POLICY-If weather forces the district to alter the school day in the form of an early dismissal, late start, or cancellation the following are the modes of communication the district will use to inform you of this decision.

*The Clinton School District will notify parents via a phone call and text message. To receive these notifications, it is imperative that the district have your current phone numbers . Please make sure that the building level secretaries have your most up-to-date contact information. The second step is to go here to opt-in to our SchoolMessenger texting service.

*All inclement weather announcements will also be posted through the district’s social media outlets which include the district’s Twitter (@ClintonMoCards) and Facebook (Clinton Schools) pages.

*Finally, all inclement weather decisions regarding the Clinton School District will be submitted to the following television stations: KSHB 41, KMBC 9, KCTV 5, and Fox 4.

The Missouri Department of Elementary and Secondary Education has released the scores from last spring’s state assessments. Typically, we receive these results during the summer or early in the fall. However, last spring the tests that were given to students were new. After testing, the state went through the process of making sure the data was correct and they set the “cut” scores that are used to determine the level of each student’s score. This process took much longer than anticipated after hitting a few “snags” along the way.

The scores for the Clinton School District are below what we would normally expect. In fact, scores across the state are lower as new standards are in place and they are now testing over those standards. I don’t say that as an excuse. Our scores are not where we would like for them to be. The district put plans into place at the beginning of the year to guarantee the success of every student according to state standards. Now that we have received the results, we can direct our efforts towards those areas most in need of improvement. We want every student to have what they need to be successful, whether that is on the state assessment or their next step beyond high school.

My concern for our students is not just what happens on the state assessments but what happens every day in the classroom. The state assessments are a guide for us in the improvement process, not a number that defines us. Our teachers are working very hard on a daily basis to make sure that every student is learning the material they need to be successful. We are very fortunate to have such committed and caring individuals teaching our children in Clinton.

Only events that appear on the district calendar are listed here. ALWAYS REFER TO THE DISTRICT WEBSITE CALENDAR FOR THE MOST UP-TO-DATE INFORMATION! 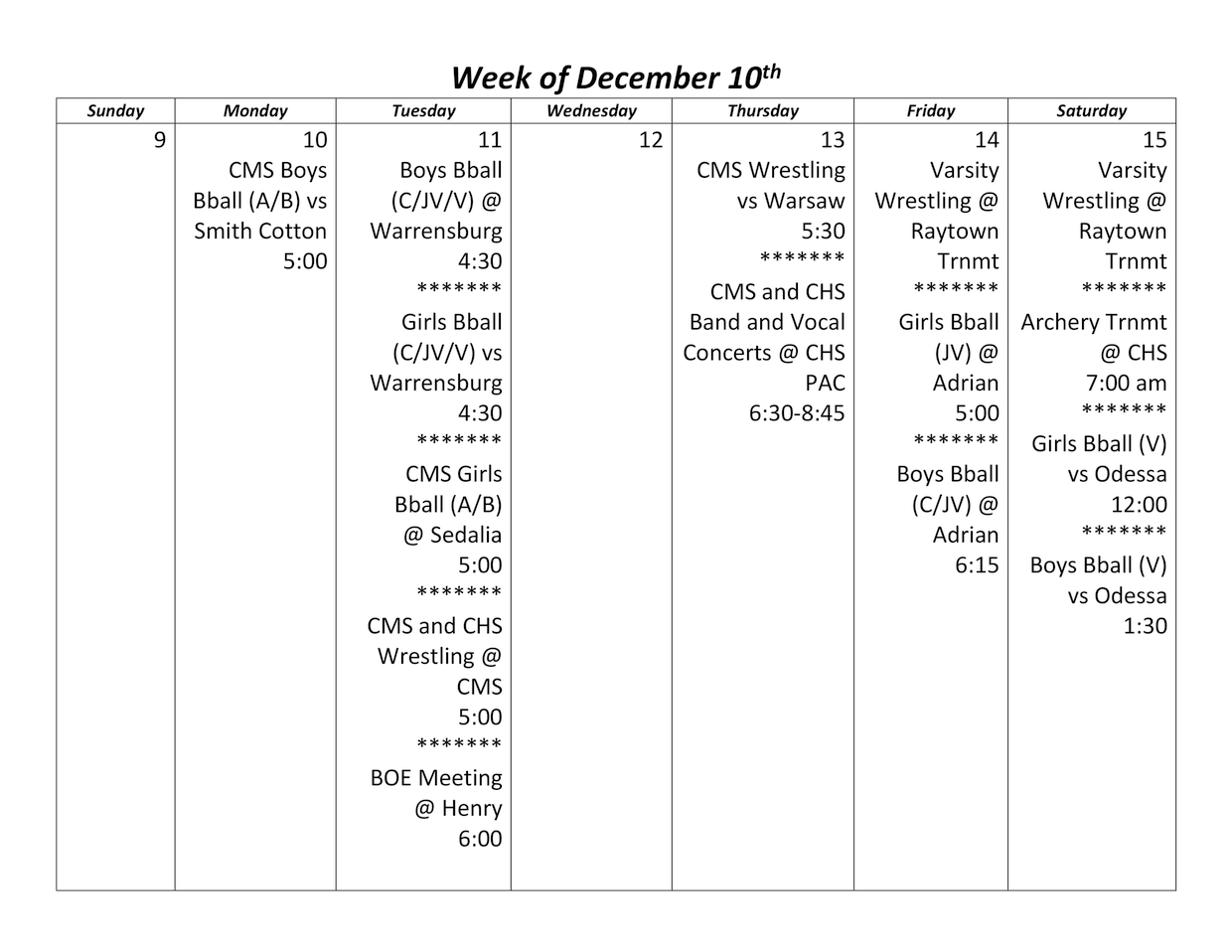 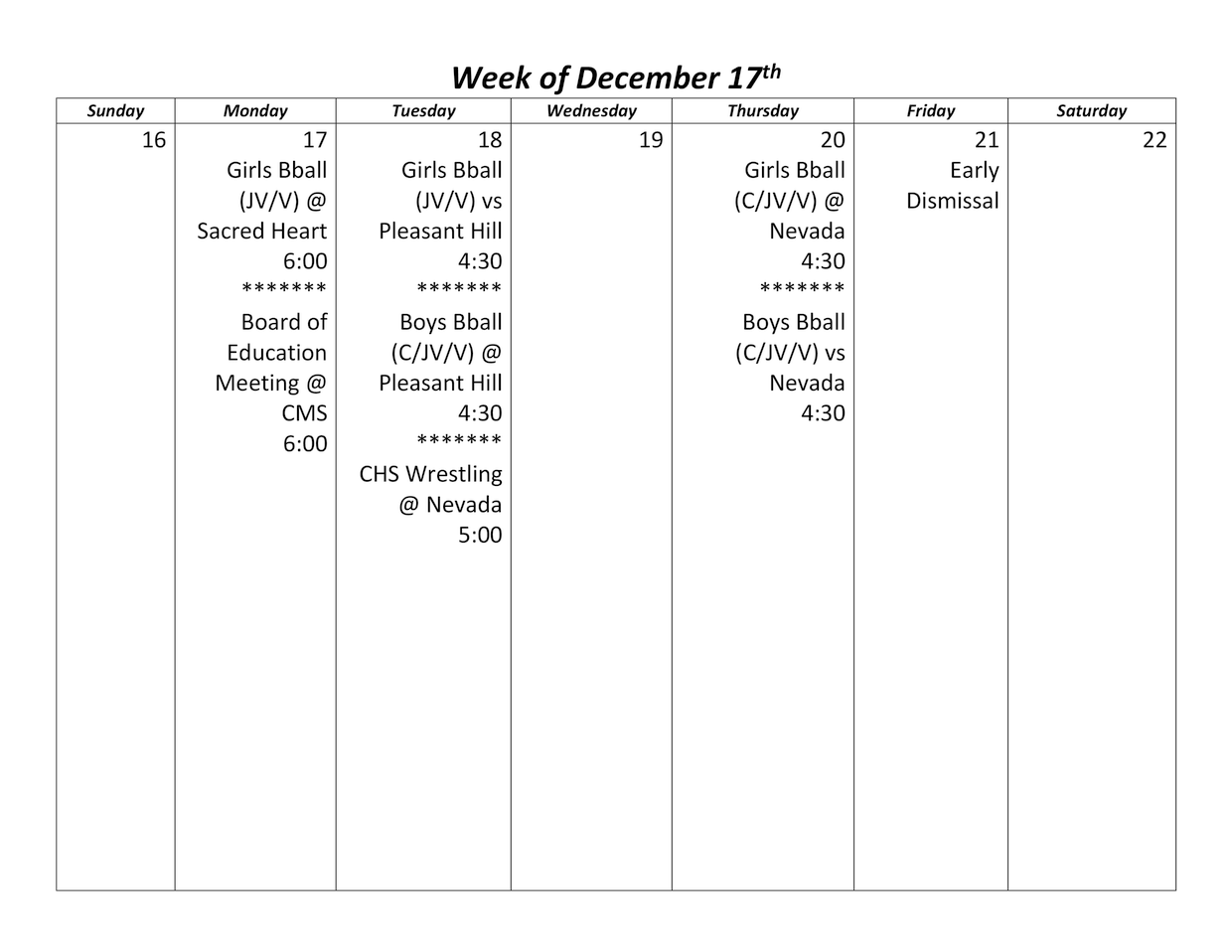 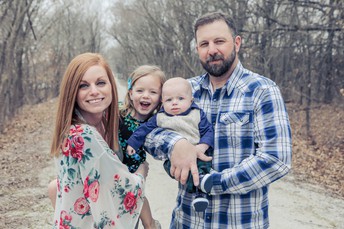 Mrs. Laura Daniel hails to us from her hometown of Boone, Iowa. She has taught a variety of classes in the English Department at Clinton High School for the past 6 years. Mrs. Daniel currently teaches; English II, Pre-AP English II, AP Literature, and Contemporary Literature/Creative Writing.

Laura and her husband, Chris, are the parents to two adorable kids, Anna (4) and Hank (1). They also have a 10 year old black lab, Remi, that completes their family. Laura's husband, Chris works for the Department of Conservation where he manages the Four Rivers Conservation Area near Rich Hill.

In her spare time, Laura enjoys reading and writing (obviously), running, cooking, and spending time at home with family.

"I think the Clinton School District is a great place to work! I love the opportunities we give our students in terms of variety of classes and I like the classes that I get to teach. I think everyone I work with strives to do their very best for students every day and it's awesome to get to work with people who take their job as seriously as I do. Our staff and students are awesome!" 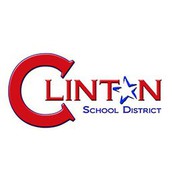