Sexual abuse is when someone forces you into unwanted sexual activity, especially through threats. In a healthy sexual relationship, you shouldn't feel threatened, pressured, or uncomfortable with your partner. If you feel these negative emotions, it is likely that you are being abused.

Emotional abuse often includes verbal abuse. It also involves the abuser taking complete control over the life of the person she or he is abusing, often by making threats or otherwise manipulating that person.

Verbal abuse is often insulting and humiliating, with the abuser making fun of or ridiculing the target. 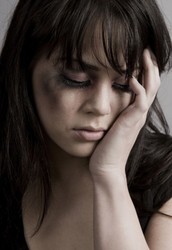 Physical abuse occurs when someone physically hurts you. This can be hitting you or throwing something at you. Even if someone only hits you once or doesn't hurt you that badly, it is a big deal.