The History Of Roller Coasters

The origin of roller coasters comes from Russian ice slides; a drop made completely of ice and occasionally bumps at the end (David Bowers 1). These ice slides were very popular when they first started, but they were also difficult to maneuver so for a fee a person who was skilled would guide you with their skills (David Bowers 1). According to David Bowers, “In France the weather does not permit a slide made of ice, so a French businessman created a slide that didn't have to be made of ice; therefore, he made the slide out of wood as well as the sled which had rollers on the bottom.” Bowers explains the evolution from Russian ice slides to wooden slides. (David Bowers 2). Since this worked well, models were soon invented indoors, and the more accidents that occurred the more people wanted to ride them to get more skills at driving the sleds (David Bowers 2). During the 1850s in France an attempt at a loop-the-loop was made, and the first roller coaster in America was The Mauch Chunk Railway (David Bowers 2). Which was used for transportation, but people could pay $1 to ride it (David Bowers 2). 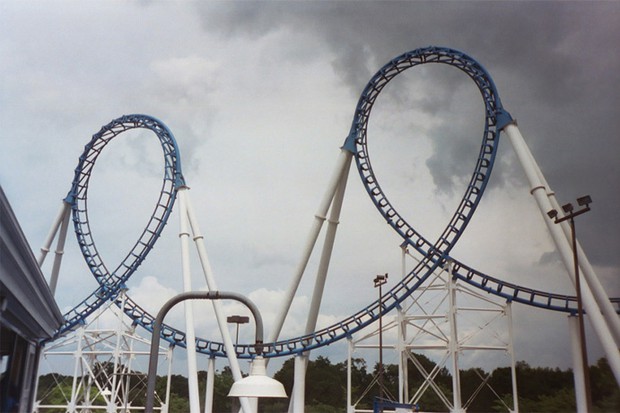 In the United States there are many famous roller coasters. A famous steel roller coaster is the Kingda Ka which is at Six Flags Great Adventure in Jackson Township, New Jersey (Linda K. 2). According to Linda K., “With a height of 456 feet, a drop of 418 feet, and a speed of 128 mph, this mighty beast is the tallest and fastest in the United States.” Linda claims the Kingda Ka is the fastest and highest roller coaster in the US (Linda K. 2). Some thrill roller coasters that are ranked as top are Top Thrill Dragster in Ohio , Millennium Force in Ohio , Goliath in California and Superman The Escape in California (Linda K 3-6). Wooden Roller Coasters that are ranked as top are Son of Beast which is in Ohio, El Toro in New Jersey, The Voyage in Indiana, Mean Streak in Ohio and The Boss in Missouri. (Linda K. 7-11).

Follow Laura Zahn
Contact Laura Zahn
Embed code is for website/blog and not email. To embed your newsletter in a Mass Notification System, click HERE to see how or reach out to support@smore.com
close