Get email updates from APUSH:

Focus on Effects of the Politcal Part of the Enlightenment

Focus on Effects of the Politcal Part of the Enlightenment

The Seeds of the American Revolution

Although Enlightenment theory is evident in the founding documents (natural rights and social contract theory in the Declaration of Independence and the separation of powers in the Constitution), other factors played a greater role in the colonists deciding to revolt to establish a new nation.

By 1776, the colonists had over 150 years of experience in self-government. Republican based governments were founded in Jamestown with the House of Burgesses in 1619, in Plymouth with the signing of the Mayflower Compact in 1620, and with the creation of the Fundamental Orders of Connecticut (1639).

Additionally, the colonists had considerable experience in framing rights doctrines including such landmarks as the Maryland Toleration Act (1649), Bill of Rights to the Virginia Constitution (1776), and the Virginia Statute for Religious Freedom (1779).

The colonists aslo had other philosophical and religious beliefs that supported republican principles. For example, the Great Awakening (1730s-1740s) led many to question authoritarin religious leaders and, perhaps, authoritarian political leaders.

The thinkers of the Enlightenment were characterized by a focus and appeal to reason and logic and a search for governing bodies of laws. To some degree, many historians of the First Great Awakening see it as partially a response to the Enlightebment. The Great Awakening was characterized by a focus and appeal to religion and God, perhaps in a more emotional way than in the past.

The exact dates of the Enlightenemnt are up to significant question. Beginning and ending times range from the early 17th century to the late 18th century. 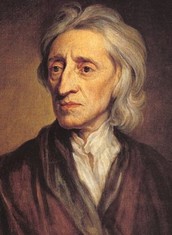 Natural Rights theorists pondered what rights humand had if left into a pure state of nature with no cities, no businesses, and no governments. The theorists suggested that those rights remained int act when humans left a state of nature.

For many Americans, John Locke's Two Treatises of Government (1689) exemplifies natural rights theory and the impact of the European Enlightenment on the burgeonong United States.

Through the Socail Contract Theory, Rosseau and others argued that a social contract existed between a government and its citizens. That is, citizens agreed to give up some rights so that the government would protect other more imprtatn rights.

Thus for the Declaration of Independence, "...to secure these rights Governments are instituted among Men, deriving their just powers from the consent of the governed. That whenever any Form of Government becomes destructive of these ends, it is the Right of the People to alter it or abolish it..."

Montesquieu wrote that, "...government should be set up so that no man need be afraid of another..." Montesquieu belived that power shiuld be separated amongst multiple groups of branches of government.

From these and other inputs James Madison helped to create a separation of powers complete with checks and balances between the branches of government.

Follow APUSH Classes
Contact APUSH Classes
Embed code is for website/blog and not email. To embed your newsletter in a Mass Notification System, click HERE to see how or reach out to support@smore.com
close