Are our cultures as different as they seem?

Are our cultures as different as they seem?

I will try to change your opinion of China

Ana Moreno González graduated from the University of Granada (Spain) in 2014, where she studied a Bachelor Degree in Translation and Interpreting. She specialized in English and Chinese languages and she keeps perfecting the latter while living in China. Currently she is attending a Global MBA in China from ESEUNE Business School (Spain). She would love her job to mean a bridge between Chinese and Spanish culture and economy.

As we all know or suppose, Chinese culture is different from ours in almost every aspect or dimension, and this could make it difficult to success doing business with them. But what kind of differences can we observe in cultures? Obtained from a study conducted by to Prof. Emeritus Geert Hofstede in more than 70 countries, culture can be divided in six dimensions as follow: 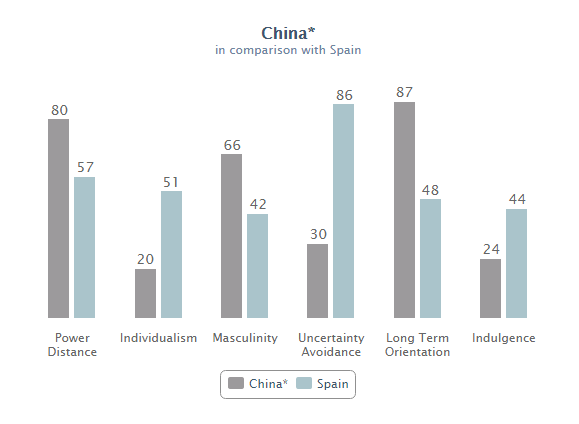 But now the question is: which of these dimensions make Spain and China so culturally far away from each other? Even I am obviously not an expert on the field, I would like to introduce some of my short experience in China related to how these dimensions could affect Chinese and Spanish people when doing business together.

Well, Spain obtained a medium score in almost every aspect except Uncertainty Avoidance Index, while China moves up and down in every dimension. This makes for both countries difficult to integrate their cultures, and this is translated to problems when doing business together if you do not pay enough attention to details.

So what can we do if we see that regarding Power Distance China is ranked 12 among the 74 studied countries, while Spain is only the 45th one? We have to know how important hierarchy is for Chinese people. According to Confucianism, it is extremely important to respect those with a higher status than yours, and this have to be shown in doing business also. For example, when you choose seats on the table, the most important person must be sat at the head of the table; or when toasting you should make your glass always keep under his/her glass as sign of respect.

And what about individualism and collectivism in these cultures? Spain is placed 30 in Individualism ranking, but Chinese culture is so collective that they are in the 56th position. Of course, relationships (关系, guānxì) are basic when going to negotiate with Chinese people. While living in China I have realized (and it has been confirmed by some Chinese friends) that Chinese people normally tend to not even lift a finger for a person they do not know, but they will do whatever it is in their hands to help you once you have met them. When doing business with Chinese people, you cannot forget to get in contact more personally with them first, normally having lunch or dinner together, even quite the opposite is what you would do in Spain, as we tend to have lunch after the business is all done. Chinese people will this way feel more connected to you so it will be easier to negotiate with them. 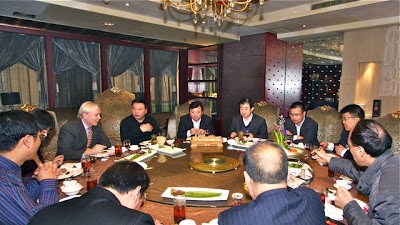 Regarding masculinity, China is placed 11th, which I think is quite evident regarding Chinese competitiveness. Since Chinese people are born, they have to fight and work as hard as possible to be successful, they have to go to the best schools and universities, they have to be good at languages, sports, school subjects… so they can stand out among the thousands of millions people there are in their country. Whereas, in Spain, people try to go unnoticed. This does not mean that we are less hard-working, but that we refuse to resort to aggressive competition. What can we do to soften business concerning this dimension? We have to always keep in mind that Chinese are long-hour working people and live in a society in which they are continually challenged and seeking for recognition, so when doing business they might not care about hours and even if they tend to separate working life, from personal life, they may ask questions that you can find too personal but that they think are completely normal (eg. “Are you married?”; if not: “Why?”)

Uncertainty Avoidance Index is the only dimension in which Spanish culture is clearly much higher than Chinese’s. Spanish people like to have their future well defined and structured as soon as possible, so they will always want to have meetings well organized and, when possible, know in advance that the result is going to be positive. Chinese people, on the contrary, prefer to enjoy the present and not think in the future, try to do business as they come; I think that is why you can still bargain in China, because nothing is completely set. On the other hand, (and this makes me think that we are not so culturally different) there is a saying in Spain which more or less means “Who sets the rule, sets the tramp” (“Quién hace la regla, hace la trampa”) which I think fits perfectly with Chinese’s way of thinking and acting.

As regards Long-Term Orientation Index, Spain is ranked 44th (out of 93), what means that they are a short-term oriented society. As I said according to Uncertainty Avoidance Index, Spanish people do not like to think about the future, they prefer to have set rules to follow and live their day a day. However, China is ranked 4th, which makes Chinese’s one the most long-term oriented cultures. For them, when doing business, it is easy to move from one topic to another even if they seemed to be already closed and agreed. It is also important for you to know that they will like to do a long-term agreement which involves long-term goals and objectives.

Talking about Indulgence vs. Restraint, China is considered to be a restraint culture, while Spain seems to have a balanced one. Chinese people are restrained by rules and tend to focus in working and do not pay much attention to leisure activities, which is related to what I have already said about China being a masculine culture. Nevertheless, Spain is one more time in the middle between Indulgence and Restraint. You have to be careful when dealing with Chinese rules, and Chinese way of thinking, as they will find it difficult to change them. When something is set in a particular way, alterations in the procedures, methods, compounds… that were not regarded as a possibility in advance, will be difficult to assume.

Once we have analyzed both cultures, what must be highlighted is that, even if our cultures are different and we are raised and educated differently, we should focus in what make us similar. This way, it will be always easier for you to understand them and do not see differences as defects, but as richness that will make it able for both companies to grow. 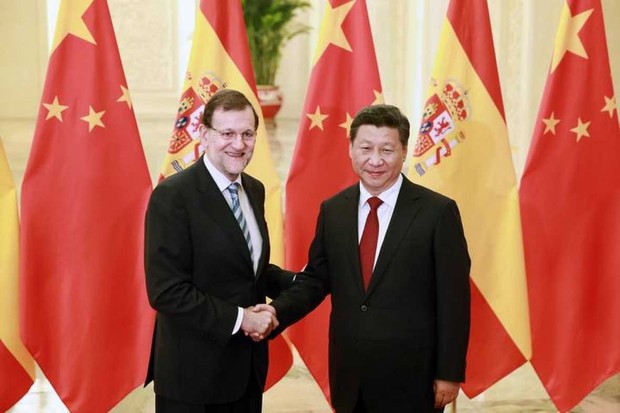