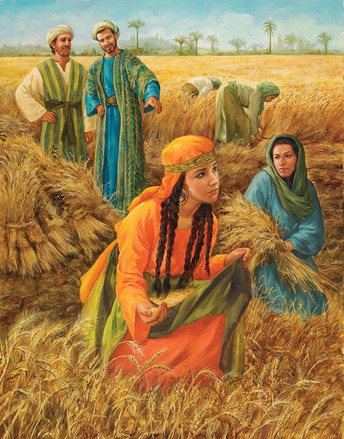 Share a time when someone was kind to you.

The narrative of Ruth, Naomi, and Boaz took place in the time of the judges. An Israelite man named Elimelech, his wife Naomi, and their two sons left their land in the town of Bethlehem because of a great famine. They moved to Moab, and soon Elimelech died. The sons married Moabite wives and then the sons also died, leaving Naomi and her two daughters-in law poor widows. Naomi decided to go back home, but urged her daughters- in-law to stay in Moab, where they might find another husband. One stayed behind, but Ruth would not leave her mother-in-law. She was committed to Naomi and the one true God. Back in Bethlehem, Ruth gleaned barley from Boaz’s field for food and found favor with the much-older distant relative of Elimelech. Boaz, who was also committed to the one true God, redeemed Elimelech’s land for Naomi and married Ruth. Boaz and Ruth had a son, Obed, who would become the grandfather of King David.

Dear God, thank You for Your love and mercy. Help us to show mercy to others. In Jesus’ name we pray. Amen

Ruth left her homeland and went back to Israel with her mother-in-law, Naomi. She worked to take care of Naomi.

Boaz let Ruth gather extra grain from his field so that Ruth and Naomi would have enough food to eat. He made sure that Ruth stayed safe. Later, he redeemed the land that used to belong to Naomi's husband and married Ruth.

Ruth was redeemed by Boaz, who was willing to pay the price to protect her. Boaz reminds us of Jesus, who also willingly paid the much bigger price to pay for our sins. It cost Jesus His life. Jesus is our Redeemer.

Jesus, our Redeemer, came from the line of David. David's great-grandmother was Ruth!

For the Lord your God is a merciful God. Deuteronomy 4:31