Why is it called Apollo?

The famous space mission Apollo was named by Dr. Silverstein. He believes he chose the name after reading a book of mythology. He thought that the image of Apollo riding his chariot across the Sun was fitting because of the project.

The Apollo 4 mission was a success ending in the crash of the unmanned shuttle in the middle of the Atlantic ocean.
Get Directions

Where was Apollo 4 destined to go and what was its purpose?

Apollo 4 was never meant to anywhere but up, into through a few layers of the atmosphere. It was used to check whether or not the spacecraft could withstand the heat of leaving to atmosphere. It also tested the launch codes, emergency detection systems and the propulsion systems. 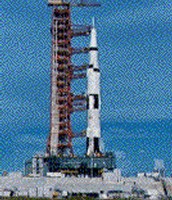 The first major accomplishment was that the things it was testing were a success. The hull stayed intact.