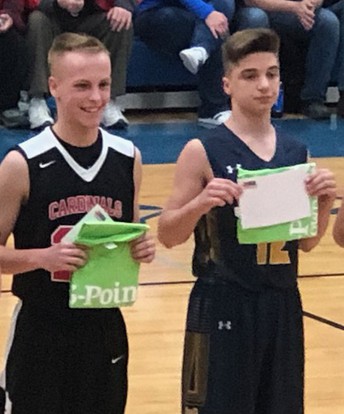 Congrats to Brennan Carlson on advancing to the 3-Point Shoot-Out State Finals! Brennan tied for 1st in the East Dubuque Sectional with 11 of 15 3-point shooting on Friday, March 1. Way To Go, DAWG!!!

Brennan will now shoot in Peoria at the Bradley Center this Thursday night for a spot in the Final Four Shoot-Out on Friday, March 8 between the 2 IHSA State Semi-Final 1A Boys Basketball games. Good Luck, Brennan!

Also congrats to Braedon Fyock of Forreston who also advanced (as well as the other qualifiers from Warren and Amboy). Braedon has many Aquin friends and relations who will be rooting for him and Brennan on Thursday in Peoria.

Good Luck Boys! #nuicstrong (and thanks to Dawn Carlson for sharing the pic, Brennan is on the right!) 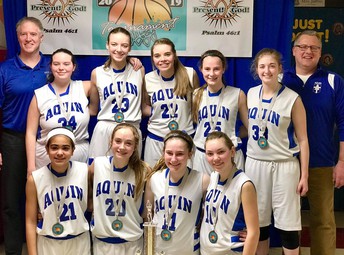 On Saturday, February 23, Aquin's 8th Grade Girls Basketball Team claimed the Tri-State Tourney Championship held at Immanuel Lutheran in Freeport. The girls are shown at the right with their trophy and coaches. Way to go, Ladies! (thanks to Alise Arndt for sharing her pic of the champs) 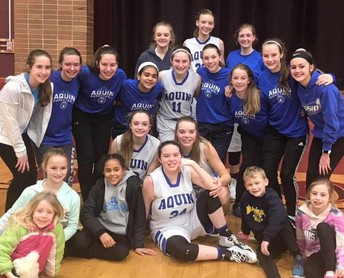 3 more rounds of 'Congratulations' to the Aquin 8th Grade Girls Basketball Team--and the 7th Grade Girls Basketball Team! Both teams claimed their Tourney Conference Championships this weekend in Dakota. Both teams also claimed the Season Conference Championships as combined, the teams went 37-0 for the season. It should also be noted that many of the girls played on both teams throughout the season so that the 8th grade had enough players to make a team. Way to go, Blue Jays--in support and in accomplishments!!!

(thanks to Jim Manson for sharing his pic of all the girls on the teams and their small but mighty Superfan section!)

As a finale to each season, each sport will be hosting Awards Banquets. Here is the schedule:
Paste in your blog/website to embed.