Get email updates from Josie:

The Monroe Doctrine was spoken in President James Monroe's seventh annual message to congress on December 2, 1823. It warned the European powers not to interfere in the obligations of the Western Hemisphere. The Monroe Doctrine implied that the U.S would not tolerate colonization or any other form of monarchy.

In 1865 the Monroe Doctrine was invoked by the U.S government. The government then applied diplomatic and military support to the Mexican President Benito Juárez. After the U.S gave him the support they needed, they revolted against the Emperor Maximilian, who was placed into power by the French government.

The importance of the Monroe Doctrine was more great than imagined. This document pushed for more nationalism in the United States and around the country. President Theodore Roosevelt had pushed for our Marines to help protect the country of Haiti, and Nicaragua to keep Europeans out. Also this document gave J.F.K the right to quarantine Cuba during the Soviet Union missile crisis back in 1962. 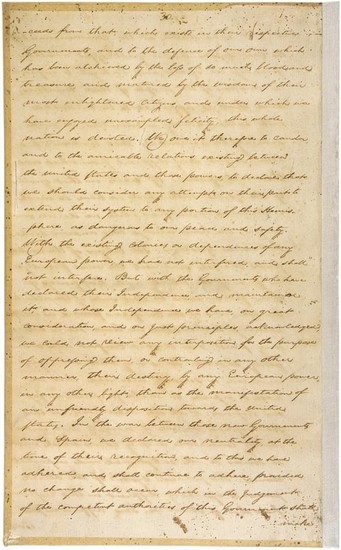 Follow Josie Moreno
Contact Josie Moreno
Embed code is for website/blog and not email. To embed your newsletter in a Mass Notification System, click HERE to see how or reach out to support@smore.com
close