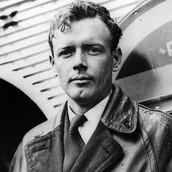 A biography of Charles Lindbergh

Charles Lindbergh was born on February 4, 1902, in Detroit, Michigan. As a kid, he showed exceptional mechanical ability. He prefered the farm life over the city life. His father was a congressman and he had to drive his father around for the 1916 election. At 18 he entered the University of Wisconsin, but dropped out after only 3 semesters because he failed his classes. After that, he joined the U.S. army as a pilot, but the war was over and the U.S. military didn’t need many pilots, so he got a job working for the U.S. postal service. He plotted air mail routes for the U.S. government. He also worked as a dare devil stunt pilot. In 1919 a hotel owner named Raymond Orteig offered 25,000 to anyone who could fly a non-stop flight from New York to Paris. He was determined on the Orteig prize. He practiced and practiced because he knew many had failed and either died or got seriously injured. On May, 10th, 1927 he left New York to win the Orteig prize. He arrived in Paris on May 11th, 1927 and he won the Orteig Prize. Before he left Paris a guy named Harry Guggenheim, an aviation enthusiast and millionaire, told Lindbergh to get in touch with him after his flight. Lindbergh did get in touch with him and Guggenheim sponsored Lindbergh a 3 month tour of U.S. He was flying the spirit of St. Louis. He touched down in 49 states, visited 92 cities, and gave 147 speeches. After that, the U.S. government asked Lindbergh to fly to various Latin- American countries in December 1927 as a symbol of good will. While in Mexico, he met Anne Spencer , daughter of Dwight Morrow who was the american ambassador there. He married Anne Morrow in 1929. He taught her how to fly and they went on many expeditions. Anne is famous for some of her poetries and other writings. Between 1931 and 1935, Lindbergh worked on and developed an artificial heart that actually worked. On March 1, 1932, Lindberghs 20 month old son, Charles Augustus, Jr., was kidnapped from his family home in New Jersey. Lindbergh hired Al Capone, a Chicago Gangster, to help him find his missing son. About 10 weeks later, the body of his son was found. They accused Bruno Hauptmann of the murder, and in 1936, he was executed. In 1938, Hermann Goering, a high Nazi Official, awarded Lindbergh with the German Medal of Honor. In 1941, Lindbergh joined the America First Committee, it was a committee that opposed voluntary entry into WW2. He became a leading spokesman of the committee. After the bombing of Pearl Harbor, Lindbergh stopped his non-involvement activity. In April 1944, he became an Army and Navy adviser. He flew on fifty combat missions and helped develop cruise control techniques for aircraft. After the war, he withdrew from public attention. In 1954, President Eisenhower made Lindbergh Brigadier General in the Air Force. Lindbergh also helped design the Boeing 747 Jet. In 1953, Lindbergh published his book, The Spirit of St. Louis. In 1954, it won a Pulitzer Prize. In the 1960’s, he joined the Conservation Movement. He died of cancer on August 26, 1974 in his Hawaiian home on the island of Maui. He was buried at Palapala Ho’omau Church. A collection of his writings called The Autobiography of Values was published in 1978.

Charles Lindbergh's son was kidnapped from his home. Later, Bruno Hauptmann was accused and charged with his murder. He was later executed.

This is Lindbergh's plane that he flew when did his many daredevil flights.

This is the medal Hermann Goering, a high Nazi Official, gave to him for all he has done. This medal is called The German Medal of Honor. This is a really important and prestigious award.
Charles Lindbergh - Flight Across the Atlantic

1. Why do think most of the people that tried to cross the Atlantic Ocean non-stop failed

2. Why do you think this kidnapping was called the crime of the century

Charles Lindbergh helped to inspire others to follow their dreams and never give up. He also inspired more pilots to do more crazy things, like fly non-stop to Antarctica. He also made some improvements to aircraft making aircraft more effective and all around better