ashanti is using Smore newsletters to spread the word online.

Get email updates from ashanti:

The father of Virginia

The father of Virginia

Biography and Beliefs on government

Thomas Jefferson, author of the American Declaration of Independence and the third U.S. president, was born on April 13, 1743, at the Shadwell plantation located just outside of Charlottesville, Virginia.Thomas grew up with 10 siblings his dad Peter Jefferson was a great framer who produced the first accurate map of the Province of Virginia but thomas dad died at the age of 9 .Thomas pastime was playing in the woods the (violin)and reading,when he was in school he had to study Latin, and Greek at the age of 14 years old. 1767-1774 pratices lawer and won many cases, Jefferson fell in love with Martha Wayles Skelton and had six kids and he died on July 4 1826 Charlottesville .Beliefs. He favored states rights over a strong central government. He supported the idea that states could nullify federal laws (nullification).

2. He was a strict constructionist - he favored a literal interpretation of the Constitution.

3. He wanted a smaller government with very little intervention in daily life.

5. He saw the country as a "nation of farmers." A simple land with simple, peaceful needs. 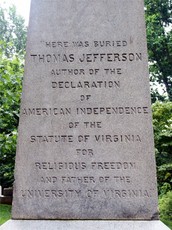 Quotes from this figure

On Mr.Jefferson stone it says "american Independence , Statute of Virginia , and Religions freedom and father of University of Virginia" "Honesty is the first chapter in the book of wisdom".

."In matters of style, swim with the current; in matters of principle, stand like a rock.

.I hold it, that a little rebellion, now and then, is a good thing, and as necessary in the political world as storms in the physical." 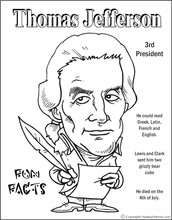 The books that Thomas Jefferson publish

Thomas Jefferson wrote up to 96 books the best seller was this book and.......

." Thomas Jefferson the art of power"

.The wisdom of Thomas Jefferson

.Notes on the state of Virginia

Too Late To Apologize A Declaration With Lyrics

.Thomas Jefferson is on the 2$ bill.

.He is on a coin that equals a dollar.

He hated banks and believed that they were dangerous than armies.

Drafting Committee for Declaration of Independence

Delegate from Virginia, introduces three resolutions calling for independence from Britain. Jefferson, along with John Adams,Benjamin Franklin, and two others, is assigned to the committee charged with drafting what will become the Declaration of Independence.
Get Directions

Opponent of the figure and WHY

Jefferson was a confusing guy he had a issue with SLAVES .But he had a love life with with a slave and moved her to Paris. Successful in outlawing the international slave trade to Virginia, he was disappointed by the failure of his early efforts to end or restrict slavery, and came to believe that a practicable solution to the problem could not be found in his lifetime.

ashanti is using Smore newsletters to spread the word online.