The ANCWL and the Anti-Apartheid Movement

A women’s sector of the ANC was created in 1931, 19 years after the ANC was formed. This group was called the Bantu Women’s League, BWL. When the government informed South Africans that women would be required to carry passbooks again, despite the accomplishments of earlier resistance groups that ended the system temporarily, the BWL was created. In 1948, the ANCWL, African National Congress Women's’ League, was formed with goals including allowing women to act without passbooks, removing the tribalism and segregation of Bantu-education and eliminating beer halls in South Africa. In the early stages of the anti-apartheid movement women were not considered fit to organize political action, so the BWL formed its own group with president Charlotte Maxeke and, later, the ANCWL was led by president Lilian Ngoyi. Women served a key role in the anti-apartheid struggle. They assisted in the Defiance Campaign, especially in the Eastern Cape where 42% of participants were women. Following this event, the ANCWL joined the Federation of South African Women, which encompassed many women’s anti-apartheid groups of the time. In 1955, they assisted in organizing the Congress of the People,which created the Freedom Charter. The Freedom Charter outlined an idealized South Africa without apartheid. In the 1950's and 1960's, women proved an important part of the ANC. Many male leaders, such as Nelson Mandela, were sent underground, so women, such as Albertina Sisulu, took leadership roles. In 1991, the National Women’s Coalition created the Women’s Charter. The ideal’s of this charter would be incorporated into the new Constitution of South Africa and the Bill of Rights. Despite their many accomplishments, women struggled to force as many changes as men. The female members of the ANCWL, FEDTRAW, NOW and UWCO often did not receive an education. Many members were often at home taking care of children and their homes; they were unable to attend rallies and revolts. 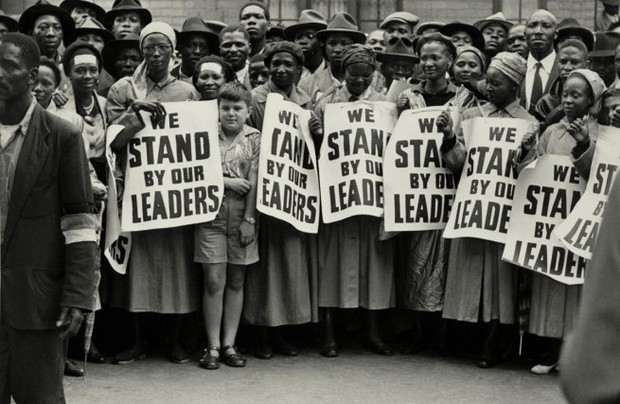 The Significance of the ANCWL

The ANCWL allowed women to advocate for, not only the end of apartheid, but also for better treatment of women in South Africa. The Women’s league fought for non-violence and for the poorer population of South Africans. It allowed women to directly affect their futures and to inspire women globally. The ANCWL showed the government and male members of the ANC that women were capable of making political changes. Members of the league helped organize the Congress of the People. This is significant because it allowed the group to incorporate womens' ideas into the Freedom Charter. The Women’s Charter outlined the ideals of women following the Defiance Campaign. Approximately forty years later, these ideas would be incorporated into South Africa’s new constitution and Bill of Rights. In 1952, the ANCWL joined the Federation of South African Women with the Coloured People’s Organization and the Transvaal and Natal Indian Congress of Democrats. This organization brought the anti-apartheid women’s advocacy groups of South Africa together. When the Women’s League went to South Africa’s prime minister J.G. Strydom with a petition against pass books, although it was unsuccessful, the attempt to make change peaceful furthered the non-violent anti-apartheid campaign. Also, the women’s sector of the ANC kept the group organized and determined following the arrests of many male leaders. In 1984, the ANCWL forced the phrase “non-sexist” into the anti-apartheid movements ideal for a new South Africa. This enforced equal rights for women, as well as citizens of all races, in South Africa.

In 1956, the ANCWL showed a petition to J.G. Strydom that protested the issuance of passbooks to the women of South Africa

We, the women of South Africa, have come here today. We represent and we speak on behalf of hundreds of thousands of women who could not be with us. But all over the country, at this moment, women are watching and thinking of us. Their hearts are with us.

We are women from every part of South Africa. We are women of every race, we come from the cities and the towns, from the reserves and the villages. We come as women united in our purpose to save the African women from the degradation of passes.

For hundreds of years the African people have suffered under the most bitter law of all - the pass law which has brought untold suffering to every African family.

Raids, arrests, loss of pay, long hours at the pass office, weeks in the cells awaiting trial, forced farm labour - this is what the pass laws have brought to African men. Punishment and misery - not for a crime, but for the lack of a pass.

We African women know too well the effect of this law upon our homes, our children. We, who are not African women, know how our sisters suffer.

Your Government proclaims aloud at home and abroad that the pass laws have been abolished, but we women know this is not true, for our husbands, our brothers? our sons are still being arrested, thousands every day, under these very pass laws. It is only the name that has changed. The ``reference book" and the pass are one.

We want to tell you what the pass would mean to an African woman, and we want you to know that whether you call it a reference book, an identity book, or by any other disguising name, to us it is a PASS . And it means just this:-

In the name of women of South Africa, we say to you, each one of us, African, European, Indian, Coloured, that we are opposed to the pass system.

We voters and voteless, call upon your Government not to issue passes to African women.

We shall not rest until ALL pass laws and all forms of permits restricting our freedom have been abolished.

We shall not rest until we have won for our children their fundamental rights of freedom, justice, and security.

African National Congress Women's League. "The Demand of the Women of South Africa for the Withdrawal of Passes for Women and the Repeal of the Pass Laws," 9 August 1956