From the Principal Tony White.....

A question you may be wondering: "Is this bullying?" When we examine an interaction for bullying, we look for four elements: intentional cruelty, repetition, an imbalance of power, and the impact the behavior is having on the target. In this case, what was said by my daughter and her friend was unkind, but not intentionally so. The immediate remorse and desire to make it right would be one indicator of that. In addition to a lack of intentionality, there is also the fact that the girls are six and don't have a lot of life experience to guide them through a moment like this.

When we analyze a child's poor behavioral choice, we seek to find if it is the result of a skill deficit (i.e., they need to learn the skill) or a performance deficit (they know the skill, but chose not to use it). In most cases with elementary students, it is the result of a skill deficit. Going back to our daughter's story, kindergartners are known for speaking without a filter, and our daughter said what she said because she didn't know what else to say. After she finished her letter, we coached her to say, "I can be friends with both of you." She felt she needed to make a choice of friends and was worried what Friend A would say. So often in cases with children, they don't know what to do, they feel they need to do something, so they make a choice that isn't helpful.

It's fun being a kid, but it's hard growing up. The story I just told you, I'm sure you've had this happen in your own home too. It stinks. It comes with growing up because in growth there must be mistakes made and lessons learned from them. It's the hard part about growing up, but it sure does lead to stronger kids. Next week, we'll talk a bit about Restorative Practices - a way to make things right after a poor choice that focuses on repairing harm more than punishment.

Have a wonderful weekend making memories with your favorite people!

In art class, our students upload a photo of their work onto Artsonia, the world’s largest online student art museum. It's a free, safe, educational program designed to connect parents and families with their child's creative activities at school. Many of you are familiar with Artsonia because we have used it in the past.

Founded over 15 years ago, Artsonia has been recognized with the national distinguished

service award for outstanding contribution to the arts by the National Art Education Association, as well as the distinguished service award by the state art associations in New Jersey, Illinois, Michigan and Colorado.

Families in K-1 or those new to Norton Creek, please check your email for an invitation from Artsonia If you would like to grant permission for your child to join our exciting school art gallery or click on the link and enter your child's name and grade, along with an email address: https://www.artsonia.com/connect/J6SC62KW

We participate only for the digital gallery and it is not necessary to purchase anything that Artsonia offers. Thank you for your support! If you have further questions, please don’t hesitate to contact me at Joyce.Simkus@d303.org.

On behalf of all staff at Norton Creek we would like to say a big THANK YOU to the PTO and Deanna Collins for the amazing Valentine's Day muffins! The staff enjoyed them. What a nice treat!

2022-2023 Kindergarten Registration Is Open- Register from January 31st through February 25th 2022. Click on link below! 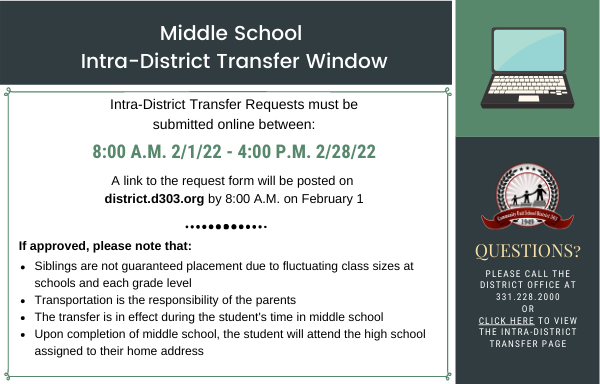 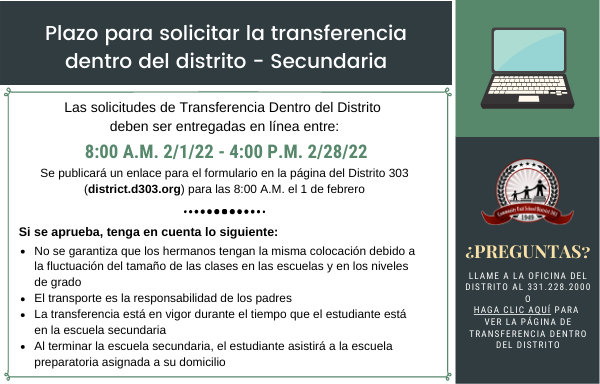 Students can be dropped off at 7:45am for the school day. It you arrive before that time please keep your child with you until 7:45 as there is no supervision outside until then.

New Email For All Families To Use

Please email any arrival/dismissal changes as well as any information for the school nurse or office staff to nor-office@d303.org

Students must apply for the privilege of using prearranged absence days through the principal’s office.

This completed form must be turned in at least (2) school days prior to the requested absence.

for the following types of absences:

 Participation in regional and/or national contests or awards

 Family vacation—qualified by the phrase “accompanied by parent”

If your child is arriving after 8:00am please walk them into the school and sign them in.

Our next early release day will be on March 23rd. Dismissal is at 2:10pm.

The following dates below are early release Wednesdays. Please plan accordingly for your children.

Students will be released at 2:10pm on the followings dates this year-

Please ensure your students come to school dressed for the cold weather. The back of the Norton Creek building can be cold and windy most days. Please ensure they have a coat, hat, gloves, snowpants, and boots(when snow is on the ground).

If your student forgets their lunch please email the classroom teacher and drop off at the main office. Please label with the students full name.

Our next Eagles Eat Out event is TODAY February 24th at Portillos! See flier below for more details!

BASKET RAFFLE Behind the Scenes mjrhinerson@gmail.com

The basket raffle planning is moving right along! It’s going to be a good one, we promise! SAVE THE DATE for May 6th and be on the lookout for volunteer sign ups soon. If anyone would like to help fundraise and reach out to local businesses for basket donations, please email anyone from the board or our amazing parent volunteer, Marla Rhinerson!! This is our BIGGEST fundraising event of the year and we can’t do it without your help!

We are excited to announce our lovely and talented trio from last year’s variety show will be organizing another amazing event this year! Please be on the lookout for more information soon! Thank you Corinne Robbins-Jones, Joy Krelle and Michael Grudecki

Calling all shoppers! If you are shopping on Amazon, please consider using AmazonSmile. With every eligible purchase, AmazonSmile donates 0.5% to our school when you choose Norton Creek Elementary as your charity. This includes millions of everyday items at smile.amazon.com. You must use the specified link for Norton Creek to receive credit. Ask all of the Amazon shoppers in your family to use AmazonSmile! 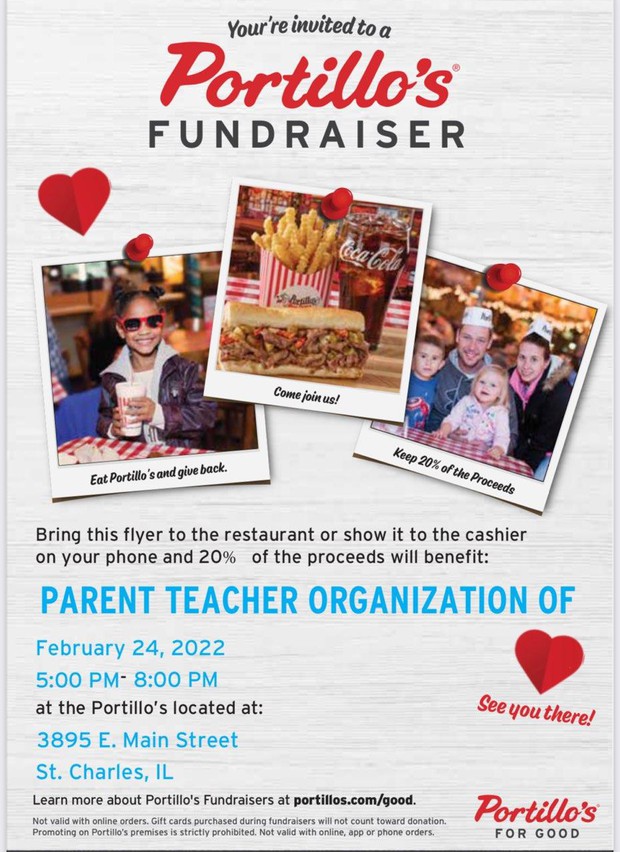 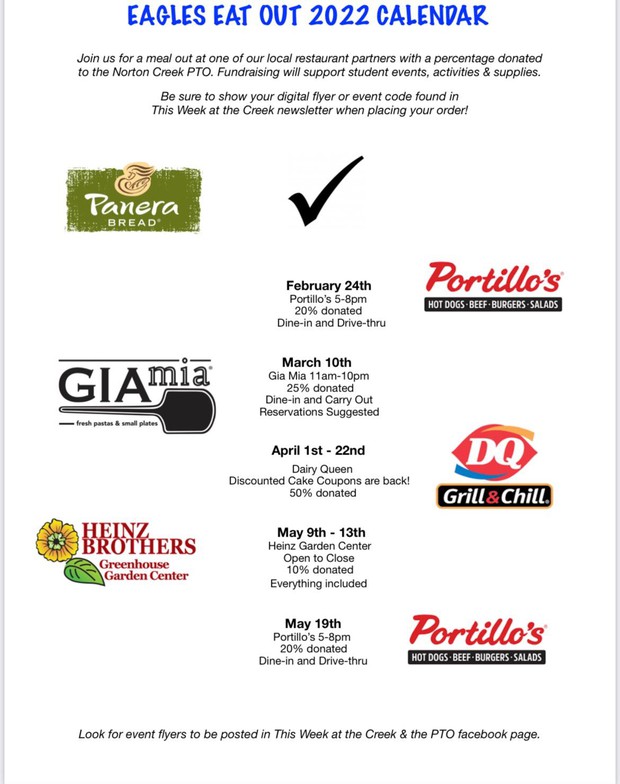 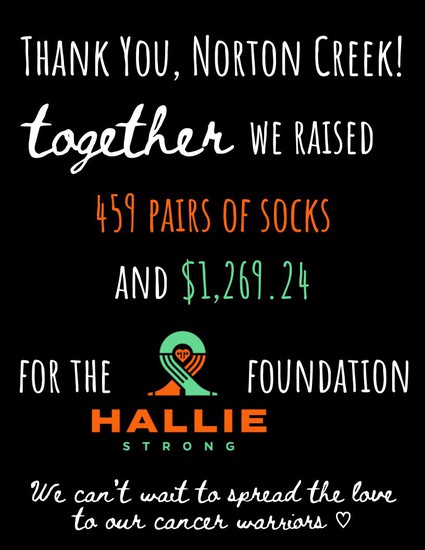 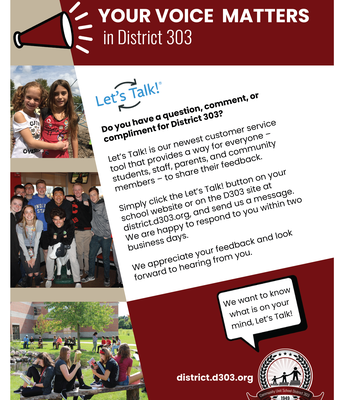 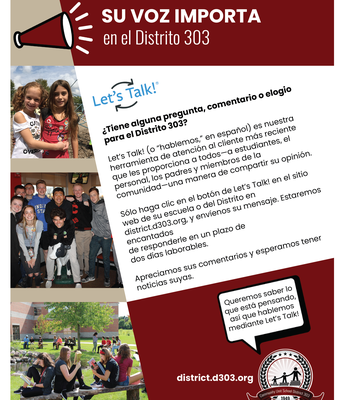