Raina is using Smore newsletters to spread the word online.

Get email updates from Raina:

Mont Saint-Michel was used in the sixth and seventh centuries as an Armorican stronghold of Gallo-Roman culture and power until it was ransacked by the Franks, thus ending the trans-channel culture that had stood since the departure of the Romans in AD 460. From roughly the fifth to the eighth century, Mont Saint-Michel belonged to the territory of Neustria, and in the early ninth century was an important place in the marches of Neustria.

In the 11th century, William de Volpiano, the Italian architect who had built the Abbey of Fécamp in Normandy, was chosen by Richard II of Normandy to be the building contractor. He designed the Romanesque church of the abbey, daringly placing the transept crossing at the top of the mount. Many underground crypts and chapels had to be built to compensate for this weight; these formed the basis for the supportive upward structure that can be seen today. Today Mont Saint-Michel is seen as a building of Romanesque architecture.

The island has held strategic fortifications since ancient times and since the 8th century AD has been the seat of the monastery from which it draws its name. The structural composition of the town exemplifies the feudal society that constructed it: on top, God, the abbey and monastery; below, the great halls; then stores and housing; and at the bottom, outside the walls, houses for fishermen and farmers.

Mont Saint-Michel has also been the subject of traditional, but nowadays good-humoured, rivalry between Normans and Bretons. Bretons claim that since the Couesnon River marks the traditional boundary between Normandy and Brittany, it is only because the river has altered its course over the centuries that the mount is on the Norman side of the border. This legend amuses the area's inhabitants, who state that the border is not located on the Couesnon River itself but on the mainland, 4 kilometres (2.5 mi) to the west, at the foot of the solid mass of Saint-Brelade. 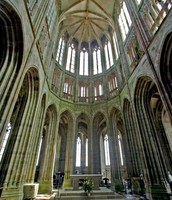 Mont st. Michel is located about one kilometre (0.6 miles) off the country's northwestern coast, at the mouth of the Couesnon River near Avranches. 100 hectares (247 acres) in size, the island has a population of 44 (2009).

Raina is using Smore newsletters to spread the word online.