What we learned about the Vietnam War from "Fortunate Son"

What we learned about the Vietnam War from "Fortunate Son" 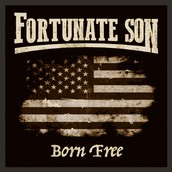 Why Was it Written?

This song was written to show the unfairness of war and the draft as they believed the wealthy and affluent could avoid war with their power. The line "It ain't me, it ain't me, I ain't no senator's son" shows this exactly and eludes to their belief that David Eisenhower, the grandson of Dwight Eisenhower avoided going to war because of his powerful family status.

The Vietnam War was a time of confusion and disbelief in the government from the citizens. Very few knew why the United Sates was in the war, even the soldiers fighting the war. Many did not want to be in the war because the war had no benefits for the United States. Thousands of unnecessary lost and wounded lives fed fire to angry protesters all across America. Send Our Troops Home!

JOHN FOGERTY, the song writer, was very against the war, ad was in favor of sending our troops home. He started a tour called the Vietnam Veterans Tour.

This song connects to the novel The Things They Carried when Tim O'Brien questions why he was chosen for war. When he was crying, and wondering why me? Why me? The song says "It ain't me. It ain't me."