Oh The Things that BCA Accomplishes!

This issue is dedicated to the various activities that have encompassed our school since the last issue. We have done so much in this building, and that is definitely thanks to our dedicated faculty whether you are planning something, hosting something or lending your services as a chaperone - as a faculty we are truly amazing! Here is a highlight of the events:

This year we gathered to celebrate the international day of acceptance, BCA’s time-honored tradition of honoring the beauty of diversity in our community. At its start, IDA was a day dedicated to Martin Luther King Jr., held around his birthday to commend his tireless effort to fight for racial equality and social justice. In 2000, Dr. King’s birthday was observed by all 50 states for the first time. Thus, that same year, BCA decided to create a special day recognizing him and continuing his work by celebrating the diversity of our school with the hope that understanding will lead to a more compassionate community, one that supports, includes, and accepts each other. The first half of the day consisted of educational workshops, organized by the Diversity Alliance. Students were allowed to choose from 44 workshops on a variety of topics involving social justice and wellbeing. The second half of the day consisted of the performances, organized by the IDA Executive Board. Over 300 students participated in a variety of performances, embracing both the vision of Dr. Martin Luther King Jr. and also the diversity of the students and staff at BCA. A special thank you goes out to Irma Seltzer, Nancy Joa, Katie Blake and Carly Berwick for their efforts in coordinating such an amazing event. - Irma Seltzer and Katie Blake 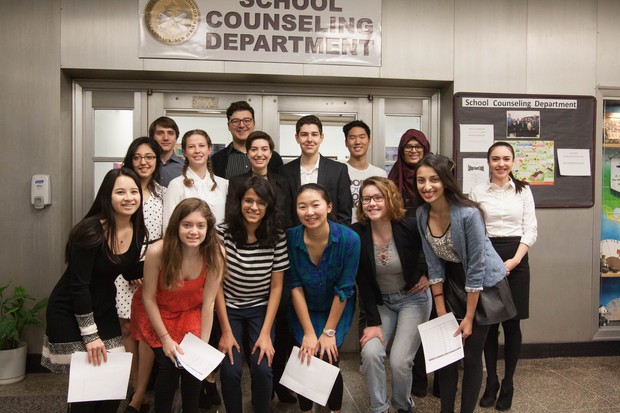 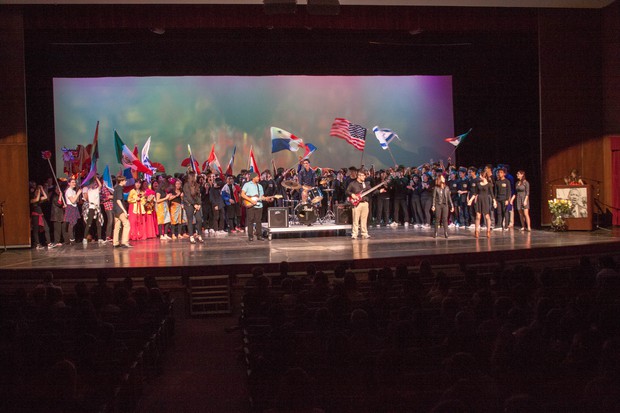 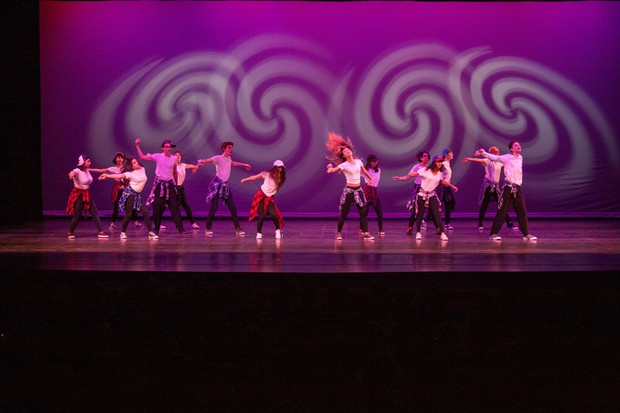 JSA Recognized as Chapter of the Month

Featured in MAS Liberty the JSA online newsletter, BCA's Chapter was featured as the organization of the month. Here are some of the accolades given in the article. "...this month's Chapter Spotlight is none other than the Bergen county Academies Chapter from Hackensack, New Jersey. The chapter, currently led by President Olivia Vladyka...consists of about 60 students,...one of the largest most active clubs in the school...On a local level, the BCA chapter is extremely involved, being active in not only their school, but in their community as well." Congratulations to Scott Demeter and the JSA Chapter. Please visit this website for the entire article. https://issuu.com/mas-liberty/docs/mas_liberty_january_issue 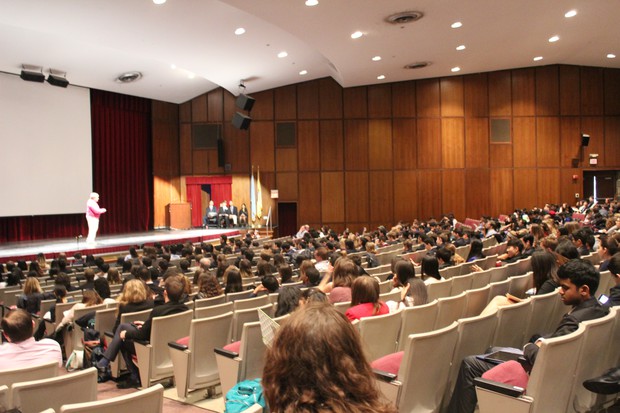 On January 26th and 27th, BCA's AMUN Secretariat hosted the 18th annual Model UN conference. Over 450 students attended this event with 28 outside schools from the tri-state area. Students began planning for the conference last year in May and continued throughout the summer and into the school year. From writing topic papers, to updating the website, handling the registrations as well as all the logistics, this years AMUN Secretariat went above and beyond. The conference was an amazing success and the students are to be commended for their efforts. A very big thank you to our faculty chaperones, our custodial staff and the administration for their continued support of the conference. 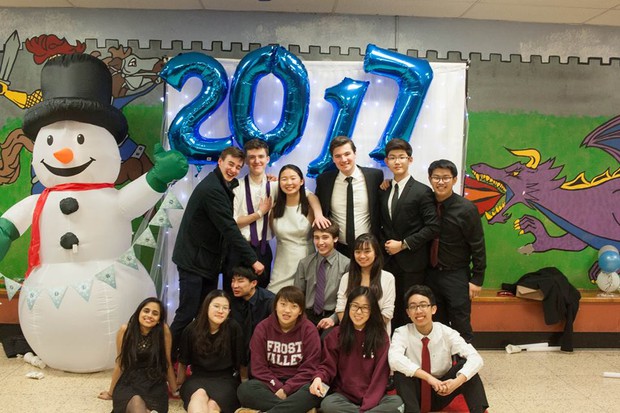 Winter Wonderland was a dance held for BCA students and guests of their choosing on February 3, 2017. This year, the DJ, hired through Ice Cold Entertainment showcased an impressive setup of intelligence lighting and played lots of upbeat music for people to dance to. Aside from dancing, people enjoyed their time taking pictures at the photobooth and performing for each other at the karaoke area. But, the highlight of the night was likely the food for most people. There was a wide variety of food including halal food from Juicy Platters, White Castle sliders, Italian food, Korean food, sushi from POC, macarons, Baked by Melissa's cupcakes, and assorted desserts from Schmackary's. The night was a great success thanks to the collaborative effort of the student council, teacher chaperones, security guards, and chaperones. - Soowan Jeong 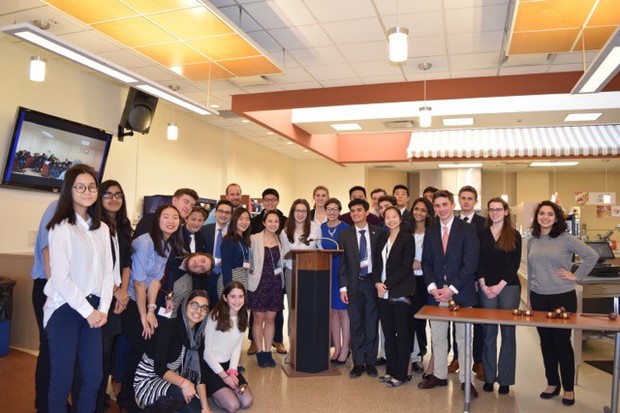 The Bergen County Academies chapter of JSA held its 7th Annual Chapter conference for students across the mid-Atlantic Region on February 4th. The day hosted numerous debates, thought talks and a wonderful guest speaker program featuring Hong (Henry) Kwon of the United Nations. Mr. Kwon is the Chief of Staffing Service in the Office of Human Resources Management at the United Nations (UN). In his insightful comments he offered an insider’s view of the greater organization, and allowed students to take part in a wonderful question and answer session and the conclusion of his remarks. The conference was organized and run by the school’s chapter which was under the exceptional leadership of Olivia Vladyka. In other exciting news, Olivia has also recently been nominated as a candidate for Lieutenant Governor of the greater organization. Our chapter is excited to take on the challenge of assisting her in her campaign during the upcoming months which will culminate at the JSA Spring State conference. - Scott Demeter 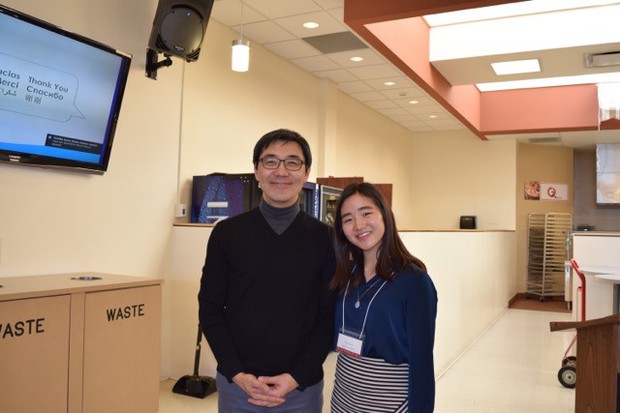 On February 14th, the annual Valentine's Day assembly took place. There were 13 talented acts encompassing soloists, bands and dancers who entertained the school and demonstrated the wide range of talent of our BCA students. Well into its second decade as a BCA tradition, Mr. Lang with the help this year of Mr. Madden coordinated over 30 auditions and worked with each act despite weather that limited rehearsal time. Congratulations to all the performers and thank you to Mr. Lang for his continued efforts in making this program a continued highlight on the BCA calendar. - Will Madden and Scott Lang 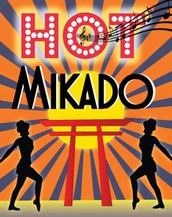 On March 3rd and 4th, BCA presents its annual musical with a cast, orchestra, crew and production team comprised of students from multiple academies. This year it’s the jazz musical Hot Mikado about a town where flirting is punishable by death and laws seem to be arbitrary. Performances are Friday, March 3rd at 7:30pm and Saturday, March 4th at 2:30pm and 7:30pm. Tickets may be purchased online at www.bergen.org/theatre and are $15 for adults and $12 for students and seniors. Tickets may also be purchased at the box office prior to the performance. - Stephen Kaplan

200 Hackensack Avenue, Hackensack, NJ, United States rusdav@bergen.org 201-343-6000 bergen.org
Embed code is for website/blog and not email. To embed your newsletter in a Mass Notification System, click HERE to see how or reach out to support@smore.com
close