Who the Vikings were

The Vikings are Germanic people who loved to explore and trade. They settled in many areas. Such as, Europe, England, Asia, and the North Atlantic Islands. When a Viking died, they could either be buried or cremated. Those who were given a burial were usually buried with things they would need in the afterlife. This included clothing, beer, weapons, food, jewelry and animals. These things were called grave goods.

What the Vikings wore

Men Vikings wore a tunic that was tight fitting at the chest. The tunic had a brood skirt. This is what men wore on top. On the bottom men wore trousers that could be loose or tight fitted.

Woman wore a long shift, with an over dress.

They both wore a long cloak or jacket in bad/cold weather.

The Viking language was called Old Norse. It was once spoken in Greenland, parts of Russia, Scandinavia, France, the Faeroe Islands and the British Isles. Proto-Norse developed into Old Norse. Vikings letters were called runes. they didn't have pens so they would carve the letters into wood.

The Vikings ships were fifteen meters long. There was lots of room below deck for food, water and the things they were going to sell. If there was little or no wind, the Vikings would use four meter long ores to row the ship. 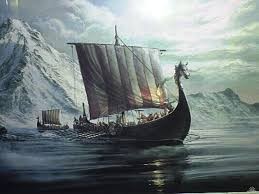 While I researched, I found out about the Vikings ships. I found out about how their ships were fifteen meters long. This was a connection to me because it reminded me of the time the girl scouts went on a field trip. We saw a huge ship that looked just like the Vikings ships. It was much smaller though. We got to sit in the wet ship and play. When I sat in it, I felt like a real Viking. The reason that I felt this connection is because I could picture both ships and how much they looked alike.

I also had a connection while I was looking at the Viking alphabet. The connection was when I first took a look at the Russian alphabet. The reason that I felt this connection is because they were both new alphabets that I never saw before, and also, I reacted the same way for both. When I first saw them I said, "I got this!" As I began to study them, that reaction changed. That was another connection I had While researching.

1.) As I was researching about the Vikings, I came across the word RUNES. While finding more facts about runes I thought the meaning might be, Viking letters or a letter that is carved into wood.

Definition of RUNE- An ancient alphabet letter, it is from Old English

2.) I also ran into the word EDDA. I had no idea what this could mean.

Definition of EDDA- Edda, a term, applies to Old Norse Poetic Edda and Prose Edda. Both written in the 13th century.

3.) I also found the word PROTO-NORSE. I knew that it ended in Norse, and Norse is the end of Old Norse (a language). I figured that PROTO-NORSE had to be a language.

Definition of PROTO-NORSE- A Indo-European language that was spoken in Scandinavia.

A god is named Thor. He is very strong and often angry. He has a good hammer. Thor often goes to Gianthome and slays many giants there with the hammer. Thor also has a carriage that flies. He drives the carriage through the sky. Where Thor drives there is storm.

These are the links I went to, to find my facts and research

https://www.google.com/ created by unknown This link is safe. We tested it and didn't find any significant security issues.

Learn more more about the Vikings and their language

MADE BY: KENNEDY VICTORIA MORRIS